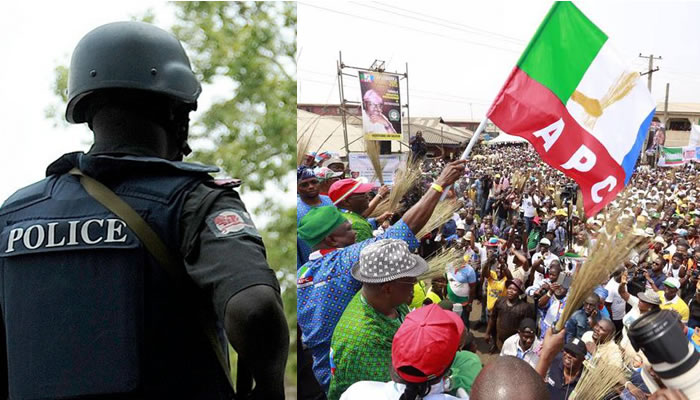 At least no fewer than 100 fierce-looking policemen on Sunday sealed off the Ikot-Ansa Town Hall, proposed venue of the congress of the All Progressives Congress in Calabar, Cross River State.

Nigeria Police said their intervention in Calabar congress was meant to avert what was referred to as ‘bloodbath’.

Despite the blockade, a faction of the APC led by a former governor of the state, Mr. Clement Ebri; and the senator representing the central senatorial district in the National Assembly, John Owan-Enoh, elected a new chairman, Dr. Mathew Achigbe and other executive members of the party by voice votes at another venue.

Our correspondent learnt that the Ikot-Ansa Town Hall venue was sealed off as early as 9:00am following the directive by the state Commissioner of Police, Mr. Hafiz Inuwa, who deployed a team of security operatives to forestall a breakdown of law and order.

Specifically, Inuwa had told our correspondent that he got intelligence report that there was likely to be bloodbath if the congress was conducted.

“I got intelligence report that there would be bloodbath; so, I had to intervene.

“A faction of the party had initially written that they wanted to hold the congress at that venue, but the chairman of the party wrote to dissociate himself from that congress.

“We acted promptly to avert a breakdown of law and order,” he said.

However, at the new venue where the exercise was eventually conducted within the premises of the University of Calabar Teaching Hospital, the National Vice Chairman of APC, South-South, Mr. Hilliard Eta, who took charge of the affairs, Mr. John Ochala, emerged vice-chairman, while Bishop Victor Ebong was voted as secretary.

A faction led by the Minister of Niger Delta Affairs, Mr. Usani Usani, had, on May 19, 2018 conducted its congress at the Cultural Centre in Calabar, which saw the emergence of Mr. Etim John as chairman.

Speaking shortly after his election, the new factional chairman, Dr. Mathew Achigbe, said, “I thank all delegates for finding us worthy to serve the party. It is a great honour and we shall take the party to the next level.

“We want to also thank President Buhari for all he has done for Cross River. We assure him that we would support him and also ensure that the state gives him massive votes in 2019.”

In his comment, Senator Owan-Enoh said that the new executive has more widespread and acceptability by the party loyalists in the state.

Other dignitaries at the venue of the state congress were a former commissioner in the Niger Delta Development Commission, Prof. Eyo Nyong, and a former member of House of Representatives, Mr. Paul Adah, among others.