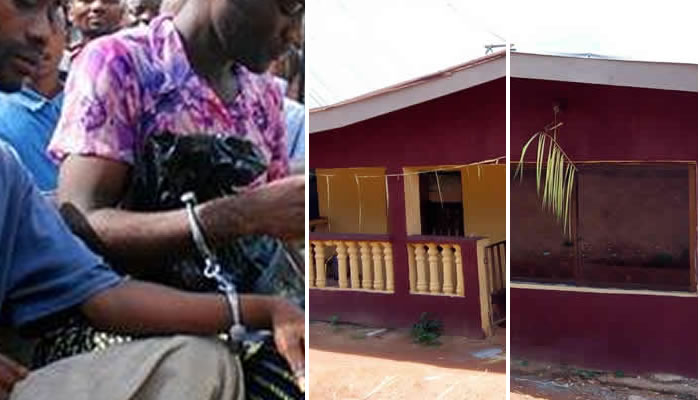 Traditional religion worshipers in Ondo State have sealed off the houses of the five suspects who allegedly tortured and raped two teenage girls in the town.

The five suspects, respectively named as Bode Akinsiku, Olabanji Femi, Abiodun Ayodele, Fadairo Wahab, and Adedayo Adebayo, are currently in prison custody, having been remanded by a Chief Magistrate Court for alleged torture and rape of two teenage girls at Kogbona Street in Ondo town.

The five suspects were also alleged to have videotaped the incident in which they reportedly stripped the victims naked while torturing them.

They also allegedly posted the video clips on social media.

“The act is considered a taboo in the town,” a source said.

The source narrated that the traditional religion worshippers, who dressed in their different attires, converged on a spot in the town where they offered prayers before moving in a procession to the residents of the alleged rapists.

The source said, “The traditionalists ejected other residents of the rape suspects’ houses and tied specially prepared palm fronds around the houses after reciting incantations.

“They also locked the doors and windows of the houses, and they used some wooden planks to demarcate the houses, all the while chanting incantations.”

The source further stated that the traditionalists decided to embark on the spiritual rites to serve as a deterrent to anyone who might want to commit such act.

A traditional chief in the town, who craved anonymity, commended the traditional rites, saying that such act would not be repeated in the ancient town.

“You see, if you watch the video, it is a taboo and an abomination — not only in Ondo town, but in the entire Yoruba land.

“We don’t want a repeat of such an ungodly act in our land,” he said.

Former minister under PDP, Prince Dayo Adeyeye, defect to APC with his supporters