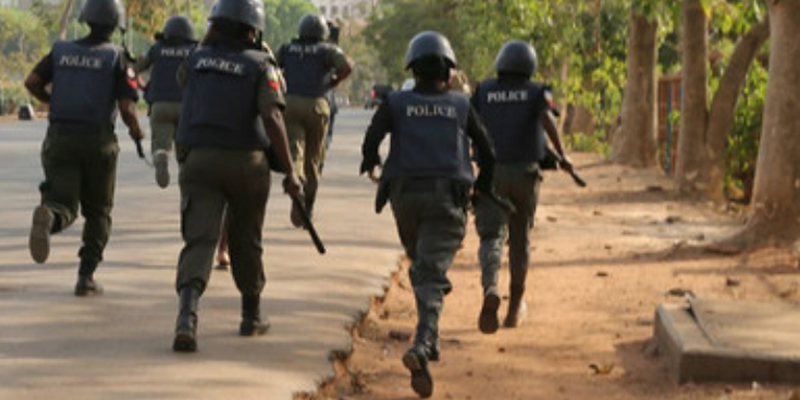 MILD TENSION in Osogbo as armed soldiers stormed the Osun State Police Command headquarters, broke the gate of the command and caused tension in the area over misunderstanding between two security agencies.

According to PUNCH report, the incident happened around 1pm as three of the soldiers had already entered the premises before the others were stopped at the gate.

WITHIN NIGERIA gathered that the whole started over the poor treatment of a civilian who was asked to prostrate inside gutter by the soldiers which led to fight between soldiers and policemen at Okini Area of Osogbo.

A trader identified as Nkechi told newsmen that traders had to hurriedly close for the day for fear of being caught in the crossfire if it resulted into exchange.

According to reports, about 25 armed soldiers were seen at the gate of the command headquarters engaging the policemen manning the area in a hot argument around 1pm.

Later, a senior police officer with the name tag, Edward Ebuka, intervened and the soldiers left the area,” Nkechi stated.

A top security source, who spoke on condition of anonymity, told our correspondent that three soldiers, who entered the premises, were arrested and disarmed by the policemen, while the others left.

He said the mission of the soldiers in the area might not be unconnected with the arrest and detention of a soldier on Saturday for an offence that could not be immediately ascertained.

The source stated, “Those who came had planned to disarm our men at the gate. A soldier is being held at the State Criminal Investigation Bureau since Saturday for an offence I don’t know.

“I think those soldiers, who came to the command headquarters, wanted to forcefully free him. Presently, four soldiers are being held here.”

When contacted for a reaction, the Police Public Relations Officer in the state, Folasade Odoro, simply said “newsmen will be briefed later on what happened here today (Monday) very soon.”