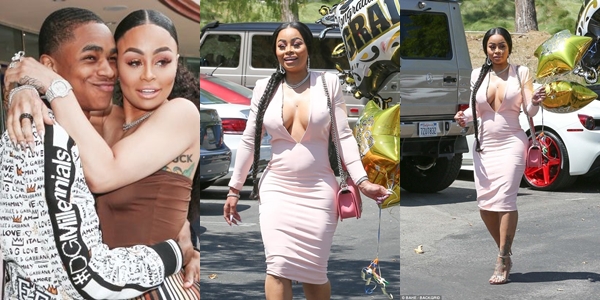 Blac Chyna had social media in a whirlwind as fans have speculated that she is pregnant by her 18-year-old boyfriend.

The TV personality looked curvier than usual as she stepped out carrying celebration balloons at a school “graduation” event for her five-year-old son, King Cairo, in LA on Friday.

And Instagram users felt that the 30-year-old might need more balloons shortly as she could have something else to announce soon. “Is she pregnant again?”, one asked, while another questioned: “is that a baby bump?”

Blac and rapper Tyga – who used to date Kylie Jenner – welcomed their son King in October 2012, then the former stripper had a little girl, Dream, 17 months, with Rob Kardashian after a short-lived relationship and engagement in 2016.

Since then, Blac has been dating 18-year-old rapper YBN Almighty Jay, after he “slid into her DMs” on Christian Mingle, a religious dating site.

The young star recently revealed that he and Chyna have not been using contraception: “’I don’t wear condoms. . . I would not want to f*** a b***h I did not want to get pregnant. If Chyna got pregnant, I would keep that s*** like “ohh daddy love you,” I love that a**.”‘

The couple posed for pictures at an event in LA five weeks ago, and Blac spent most of the time covering up her midriff with her hand.

Blac has previously been open about wanting more babies, revealing after the birth of Dream that she wants four kids in total.

“I wanna have maybe like two more [children]. I wouldn’t mind having four; I think four is a good number,” she told Us Magazine.

“No more after that. Five is too many. I’d have to get a minivan for sure, and I’m not riding in no minivan.”