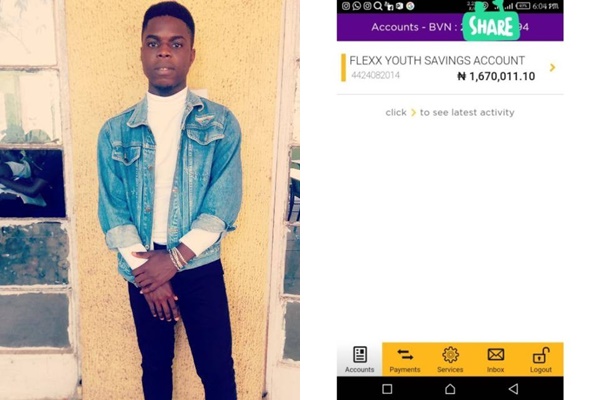 Obazie was suprised to see the credit alert and he immediately thought about transferring part of the money off his account.

Not long he got a call from his bank begging him to transfer the sum he’d transferred off the account so they can initiate a reversal.

However, they say Integrity is doing the right thing, even if nobody is watching, Obazie didn’t hesitate to transfer the money back to his account.

Read his story below:

I went to the bank,(name withheld) to deposit 167000. I did the normal transaction and left.

I confided in a school bro, who told me to await the bank call, and told me not to tell anyone else.When i got home(8-9pm), i got a call from a banker there.

He said it was a mistake,and i should transfer the money to an account he would provide. My mind drifted to bankers siphoning money ,and i told him i’d rather come see the bank manager the following day.

He said i should transfer the money, of which i bluntly refused ,and decided to go to their head office. I hung up,and switched off my phone ,to stop their incessant calls.

Then the next day, the banker called me, and pleaded that they could not balance their books, because of the fund in my account. And he said they did sack them, before 12:00pm if they dont.

I knw about the labour market, and how difficult it is to get jobs. So i told him i’d return the 500,000 which i transferr

I knw it wasnt scam or fraud bacause i did not transfer the money. They unfroze my account , so i could send and recieve cash. They also used the bank reversal technique.

The next week or probably friday, cash was sent to the account, so i went to the bank to cash it out.

When i got there, they were just looking at mend the only thing i heard them say was”that is the boy”. Not even a soul came to say thank you.

I was not mad ,and i thought they saw no need in saying thank you, since they already said it in cash.

I withdrew the money from the bank, and when they wanted to give me the money, the “bank manager” told the cashier to take the 4000 out of it..

I was now given the balance.. I was very mad tho, but being an introvert, i was cool and i left the bank.I transferred over a million naira back, and a thank you was not given.

I was hurt, because then i had needs and wants. But i was not tempted to use the money.

Even if it happens again, i will not hesitate to be that good person.