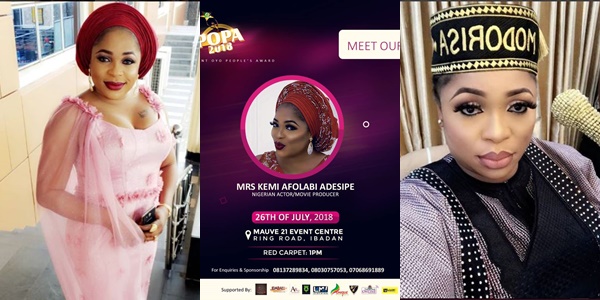 POPA Awards Unveil Kemi Afolabi As The Host For 2018 Edition

The organizers of the Prestigious Prominent Oyo People’s Awards {POPA} has unveiled Yoruba Actress, Kemi Afolabi as the host for the 2018 edition of the much talked about annual event.

The Award ceremony, which promises to be classy, will hold on June 26th 2018, at Mauve 21 Event Center, Ring Road, Ibadan, Oyo State. It kicks off with Red Carpet by 1PM.

If you must know, the host, Kemi Afolabi was born on 28th of April 1978 in Lagos, but has her roots from Ijebu Ayepe, Ogun State. She graduated from the University of Lagos. Her first appearance in Yoruba movie was in Alagba and several others.