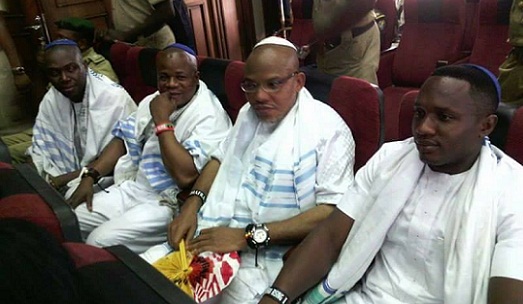 A Federal High Court Justice, Binta Nyako had earlier on February 20, 2018, ordered the separation of Kanu’s trial from that of the rest of his co-defendants, as the IPOB leader’s absence from court continued to halt progress in the case.

The judge had in April last year granted bail to Kanu with conditions which the prosecution led by Mr. Shuaibu Labaran of the Office of the Attorney General said the IPOB leader had violated.

But he went missing in September last year after soldiers invaded his home in their bid to quell his movement for the succession of five states of the South-East and other neighbouring states from Nigeria as the Republic of Biafra.

His co-defendants, who now face three counts of treasonable felony and who were granted bail only on Monday, are Bright Chimezie; National Coordinator of IPOB, Mr. Chidiebere Onwudiwe; an IPOB member, Benjamin Madubugwu; and a former Field Maintenance Engineer seconded to the telecommunication company, MTN, David Nwawuisi.

Ruling on their fresh bail applications which they filed following their re-arraignment on March 20, 2018, Justice Nyako said the applications succeeded on grounds of ill health and the number of years they had spent in detention awaiting trial.

She said the defendants had spent an average of three years in custody when the maximum penalty for the offences they were charged with, if convicted, ranged from five to seven years.

She also noted that Chimezie had earlier been granted bail by the Federal High Court in Uyo in May 2017 but the Department of State Services which was then holding him in custody refused to release him.

She added that Section 163 of the Administration of Criminal Justice Act 2015 had made bail a right of every defendant unless the prosecution was able to prove why the defendant was not entitled to bail.

“Taking all these into consideration, I have not seen any reason why I should not grant bail to the defendants,” the judge said.

The judge imposed on the four defendants the conditions mostly similar to the ones she attached to the bail granted Kanu in April last year, barring them from granting any press interview, participating in any form of rally or found in the gathering of people.

In addition to those conditions, she ordered them to produce two sureties each, for whom the cash sum of N10m should be deposited in the court’s account.

She also ordered them to deposit their passports with the court registry and must not travel out of the country without the court’s permission.

The judge ordered the defendants to report to the Commissioners of Police in their various states of residence every two weeks.

Warning the defendants, who were brimming with smiles after the ruling, to comply with the bail conditions, the judge said, “Let me warn you; there should be no gathering, no welcome oyoyo (a reference to a welcome party).

“Just take care of your health, spend time with your family. Don’t travel outside the country without the court’s permission. No press interview of any form.”

READ: Mob beats Policeman to a pulp in Lagos over reckless shooting

Justice Nyako rejected the plea by Chimezie’s lawyer, Mr. Ifeanyi Ejiofor, who also stands as Kanu’s lawyer, to substitute the requirement for cash deposit with the signing of bail bond worth the same amount.

Ejiofor had expressed his concern to the court that it would be difficult for his client and other defendants to get N20m cash each.

But the judge modified the condition saying she would allow the defendants to be released pending when they would get the cash.

She added that she would impose another condition to guarantee that they would deposit the cash in the court’s account after being released.

She then adjourned till November 14 for continuation of trial.

In the first count, all the four defendants including Kanu said to be at large, were said to have in 2014 and 2015 in Nigeria and London, United Kingdom, conspired among themselves, to commit treasonable felony by broadcasting on Radio Biafra agitation for the secession of the Republic of Biafra from Nigeria.

They were allegedly seeking the secession of the South-East and South-South states as well as some communities in Kogi and Benue states from Nigeria as Republic of Biafra.