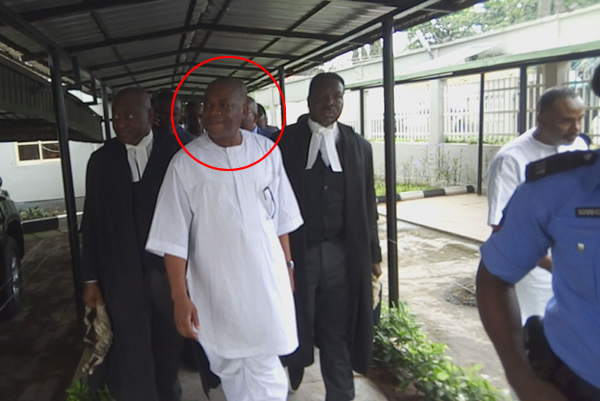 EFCC on Tuesday re-arraigned a former governor of Abia State, Orji Kalu, for an alleged fraud of N7.65bn.

Orji Kalu was re-arraigned alongside his company, Slok Nigeria Limited, and Ude Udeogu, who served under him as the Director of Finance and Account, Abia State Government House.

The re-arraignment of the defendants before the Federal High Court in Lagos on Tuesday followed an amendment to the charges filed against them 11 years ago.

With the amendment, the prosecution increased the number of charges against the defendants from the initial 34 to 39.

The amount quoted to have been allegedly diverted, stolen and laundered by the defendants was also increased from N2.9bn to N7.65bn.

The prosecuting counsel for the EFCC, Mr. Rotimi Jacobs (SAN), said the amendment to the charges became necessary in view of new facts revealed by some of the19 witnesses who had testified against Kalu and his co-defendants in court.

On Tuesday, the trial judge, Justice Mohammed Idris, dismissed the objection raised by the defence counsel to the amended charge sheet, paving the way for the re-arraignment of the defendants.

In one of the counts, the EFCC alleged that Kalu, who was Abia State Governor between 1999 and 2007, “did procure Slok Nigeria Limited — a company solely owned by you and members of your family — to retain in its account, domiciled with the then Inland Bank Plc, Apapa branch, Lagos, an aggregate sum of N7,197,871,208.7 on your behalf.”

The prosecution claimed that the N7.1bn “formed part of the funds illegally derived from the treasury of the Abia State Government and which was converted into several bank drafts before they were paid into the said company’s account.”

The prosecuting counsel, Jacobs, said the ex-governor violated Section 17(c) of the Money Laundering (Prohibition) Act, 2004, and was liable to be punished under Section 16 of the same Act.

Apart from the N7.1bn, which he was accused of laundering, the ex-governor and the other defendants were also accused of receiving a total of N460m allegedly stolen from the Abia State Government treasury between July and December 2002.

The prosecutor said they breached Section 427 of the Criminal Code Act, Cap 77, Laws of the Federation of Nigeria, 1990.

On their part, Udeogu, Slok Nigeria Limited, one Emeka Abone, said to be at large, and another fellow, Michael Udo, also at large, were accused of collaborating with Kalu to conceal the “genuine origin” of allegedly stolen funds.

The EFCC said they are liable to be punished under Section 14(1)(b) of the Money Laundering (Prohibition) Act, 2004.

When the charges were read to Kalu, Udeogu and Slok Nigeria Limited, however, they pleaded not guilty as they had done during their previous arraignments.

At the request of their lawyers, Justice Idris allowed them to continue with the bail granted them 11 years ago when they were first arraigned.

Meanwhile, the defence counsel – Messrs Gordy Uche, Solo Akuma and K.C. Nwofor, all Senior Advocates of Nigeria – called the court’s attention to the no-case submissions they had filed on behalf of their clients since May when the prosecution closed its case after calling a total of 19 witnesses to prove the charges.

They also informed the court that they had each been served with a 126-page written address by the prosecutor in response to the no-case submissions.

They pleaded with the court for a short adjournment to enable them to file a reply to the 126-page document and return to court to adopt same.

Justice Idris granted the prayer and adjourned till July 25, 2018 for further proceedings.