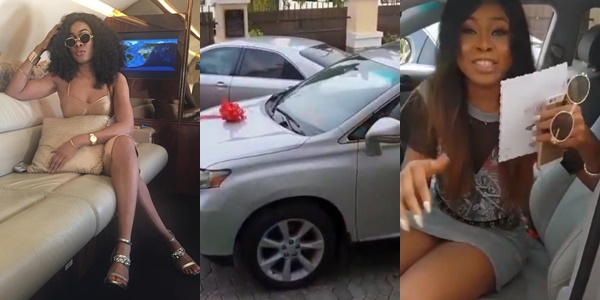 Former Big Brother Naija housemate, Princess who was part of the first evicted participants in the reality show on Wednesday July 25, turned a year older today.

Despite being accused for having different, often inconsistent and varying foreign accents was given a car as a birthday gift today by someone believed to be her partner.

The reality star was surprised with a Lexus SUV early this morning and she couldn’t contain her excitement. The car was presented with a big red bow and flowers were scattered in it.

BBN’s Seyi reveals how he stays out of trouble

Tacha blasts those calling Khafi a gossip, stands up for her (Video)

She also got a gift card from the same person who she says is “the one that always makes me smile”.

Writing on social media, The light-skinned lady who hails from the South-eastern part of Nigeria wrote:

And I couldn’t breathe….i was completely speechl?ss, couldn’t keep calm?

See photos and video below:

And I couldn’t breathe….i was completely speechl?ss, couldn’t keep calm?