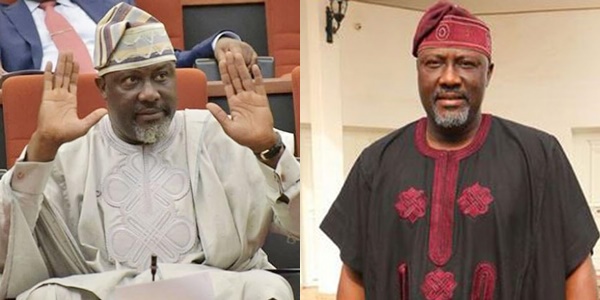 Recall that the news of Dino’s alleged abduction was made public by Senator Ben Bruce who shared a tweet saying, ’I have just been informed by Moses Melaye, Dino Melaye’s brother, that Dino has been abducted by unknown persons in a Toyota Sienna that blocked their car and overpowered them on their way to Kogi to answer to Dino’s court case. Lets be on the watch out. Will keep you updated.”

See how Nigerians reacted below:

@john_danfulani wrote: “That @dino_melaye has been adopted by armed men.Nigeria has become too insecure for dissidents & political opponents.Shame on Buhari & his men.”

@abbasiddiq wrote: “Dino Melaye gets abducted on his way to a Court case and buhari is getting blamed? Like ffs what does buhari have to gain by abducting him?”

“This man has been shouting that his life is in danger. The police ignored him,withdrew his security & APC herdsmen mocked him saying he faked his neckbrace. Did he also fake his own kidnap?!”