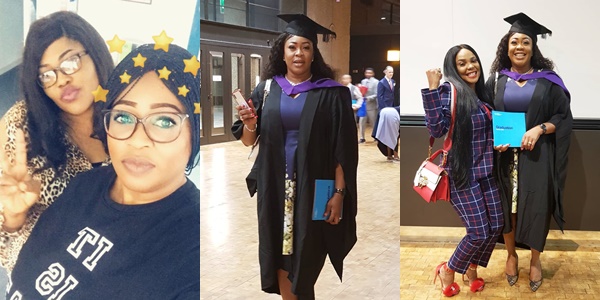 Omo Brish was among the women who graduated with First Class at London Metropolitan University last week. The ceremony was attended by her friends including actress, Iyabo Ojo.

Sharing the inspiring story behind her recent success, the mother of two wrote:

It’s been a roller coaster of emotions for me, but today which is also a day shy of my birthday is a time to celebrate my most recent achievement. A while ago, I went on a journey of self…. I had to reflect, dig deep and rediscover myself… What an adventure it has been… Let me break it down..?… In 2015, I decided to study social work because I had done a lot of research whilst pregnant with Neriah and I wasn’t fulfilled with a previous degree. Nathan was 2 years and 9 months old and Neriah was 7 months old when I hopped on the ride…. The course exceeded my original hopes and expectations. I thought I was strong….resilient. I thought I was “super woman”… Hmph..! reality hit home… I was not prepared!…. Despite this new revelation.. lol… I still trudged along. You see, I wanted it so bad that I got lost within myself. I day dreamed about how nice it would be to mingle and Identify with “professionals”. However, a few months into the course, I realised that things hadn’t changed! I still wasn’t ready; family commitments, child care, love life and all… I’d had enough and decided to quit… I had made up my mind. However, during one of our interactive lectures, we were tasked with discussing ourselves…. I was in a group with two others… I so opened up.. It was like an emotional release. I cried so hard. I lamented about how difficult it has been and how I was about to give it up. My little girl was only 7 months old and it broke my heart every single time I had to leave her with my au pair.. @orluchy_b, one of the group members who couldn’t control her tears as I lamented, looked me in the eye and said “Babes, if I can do it, then you sure can. She went on further to tell me that she has two children and her baby was only three weeks old.!! Three weeks!!!… Choi..! Talk about turning point. My tears dried up so fast that you wouldn’t have known I was crying earlier..??.. I looked at her with so much admiration and made up my mind there and then, that we were all going to do it…… TOGETHER. ??????