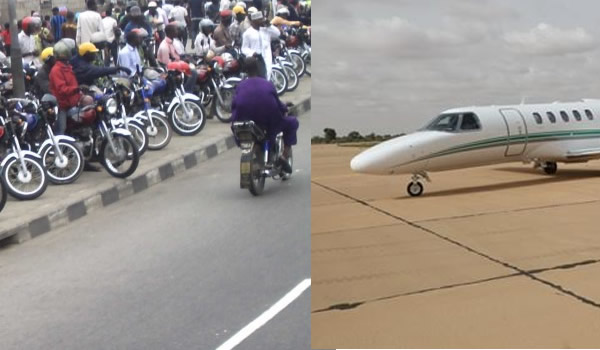 A video has gone viral showing the Sokoto Airport runway where alleged supporters of a politician rode motorcycles in pursuit of an aircraft supposedly carrying the politician.

The video shared on twitter showed that the video was shot from inside a taxiing plane and shows motorcyclists (Okada Riders) right on the same runway as the plane.

The video was captioned: “Happening in Sokoto Right now… The Runway filled with supporters of some candidate… Where did we get it wrong as a country?”

Since the video was posted, Nigerians have been reacting. Read comments below.

Happening in Sokoto Right now… The Runway filled with supporters of some candidate… Where did we get it wrong as a country?????? pic.twitter.com/vSWICu9vVO

This is not bird strike but human strike ☹️☹️☹️☹️

At this point, I think we need to call a spade a spade. It doesn’t matter if @MBuhari is not the Min. for Aviation or Dir. of @FAAN_Official but if this rubbish is allowed 2 happen knowing fully well that dis cud lead to a catastrophe, then d C-in-C must be held responsible.

I actually thought it’s a herd of cattle…

What do men want most in romantic relationships? Respect vs Sex

Cult groups clash, pharmacist and four others hacked to death in Benue community

Cult groups clash, pharmacist and four others hacked to death in Benue…