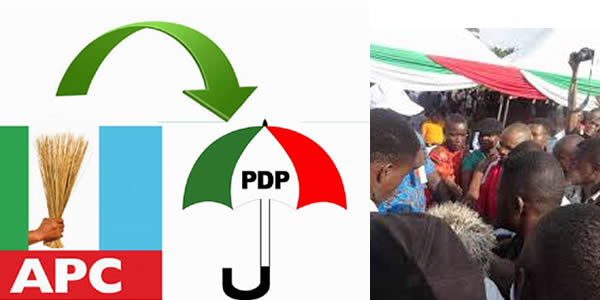 The crisis rocking the All Progressives Congress, APC, in Delta State has deepened as over 1000 of its members in Agbarha-Otor Ward in Ughelli North Local Government Area Friday defected to the Peoples Democratic Party, PDP.

The decampees specifically joined the PDP from over four factions of the APC.

They said the PDP umbrella can cover them, stressing that APC’s broom has been sweeping away their blessings in Agbarha-Otor Ward.

READ: Akpabio meets Buhari in London as he defects from PDP to APC; Amaechi confirms defection

The PDP Local Government Area Chairman, Comrade Lawrence Agbatutu received and welcomed the decampees into the PDP fold, stressing that the party’s umbrella is big enough to cover everybody.

He enjoined the decampees to obtain their Permanent Voter Cards, PVC, as well as be ready to work for the victory of the party and ensure that the Delta State Governor, Arthur Ifeanyi Okowa, emerges winner in next year’s election in the state.

Don Jazzy speaks on his single life without kids