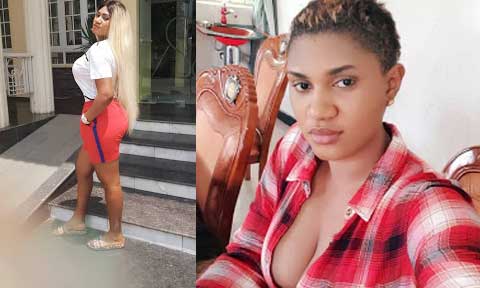 The Love That Blinded My Eyes – Actress, Rachel Ogbonna

Budding Nollywood actress, Rachel Ogbonna has confessed to Inside Nollywood, the craziest thing she has done for the one her heart once beat for.

“I’ve cried for love. In fact, I had lied to my parents because of love. I could remember when I learned the boyfriend I was dating at that time got married to his hometown girlfriend or so. I cried bitterly. I was very shocked but not surprised because I had the feeling. I saw it happening but love blinded my eyes.

That taught me lessons. A whole lot. I learned to love but not too much. I try not to love more than the man. Then I only trust men a little bit. Love is a beautiful thing but then men are really abusing it. They always want to have fun, forgetting its with someone’s heart and emotions,” she told Inside Nollywood.

The Ebonyi State script Interpreter who joined the industry 5 years ago also recalled the challenges she faced while trying to convince her parents that she is ready to build in a career in acting.

” My parents never supported me at all. It was a war at home when I made my intention known to them. I cried, begged, and even starved myself in pleading with them to allow me to act as my football career didn’t take me further after I had Appendix Operation. Yet they refused because according to them, actresses don’t get married, in fact, celebrities live the wayward lifestyle.

Most Nollywood actors lift themselves by using sugar daddies and…

All is not well with Nollywood, Wale Adenuga declares as he predicts…

But my siblings and my very reasonable uncle supported me and convinced them to allow me to act but still, they were not so cool with it. I kept hiding to go for auditions and rehearsal until I shot my first movie”, she narrated.

I stole car to raise money for marriage —Suspect

How women now oppress one another at Lagos Owambe parties

Most Nollywood actors lift themselves by using sugar daddies and mummies, Wale…

One day I will be the richest actress in Nollywood, Ruth Kadiri declares

Singer, Cynthia ‘Madrina’ Morgan reveals how family issues and illness made her abandon her music career

Deji Adeyanju: A Man In Conflict With His Inner Self

Deji Adeyanju: A Man In Conflict With His Inner Self

‘I never knew,’ SGF shocked by poor state of…