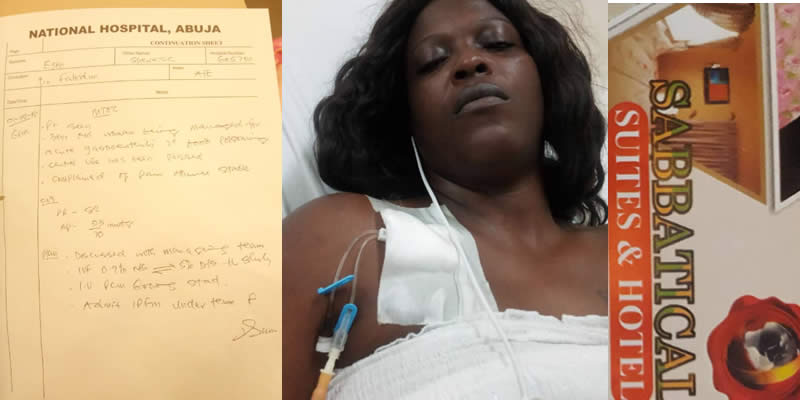 Carlene said she was given a meal prepared with rotten meat and the hotel management apologised after she called their attention to it. She later fell really ill as a result and was admitted to two different hospitals in Abuja, Nigeria.

A woman from Trinidad and Tobago is accusing an Abuja Sabbatical Suites, of food poisoning and revealed that her bag was also stolen while she was lodged there.

Carlene said she was given a meal prepared with rotten meat and the hotel management apologised after she called their attention to it. She later fell really ill as a result and was admitted to two different hospitals in Abuja, Nigeria.

The hotel management promised to take care of her medical expenses but never did. Then after she was discharged and returned to the hotel, her handbag, containing her medical report from the hospital as well as other important documents, was stolen.

Carlene said she reported the incident to the police but so far, nothing has been done about it.

Writing to LIB, she said:

Carlene am a citizen of Trinidad and Tobago I was staying at sabbatical suites hotel for sometime and got food poisoning by a meal the hotel prepared the meat was spoiled rotten and I informed the hotel manager at the time he came saw the meal and later apologize for it and so did the cook.

But later that evening I started to vomit and stool uncontrollably and was take to zone 3 hospital in Abuja from there I was transferred to national hospital.

When I got discharged from the hospital and the manager took me back to the hotel the following morning when I left to go out to get a meal on my return my handbag was missing from my room along with the medical report and other important documents that belong to me.

I informed management of what’s happening and they say they can’t give an account of my missing handbag though I left with my room key. I immediately checked out of the hotel into another and made an official report to the utako police station where they invited the hotel manager and receptionist to begin investigation into the matter up to now no concrete inform has been brought into the messing handbag but it was learned that the chef that prepared my meal was actually a waitress.

Below are photo evidence Carlene sent to LIB.