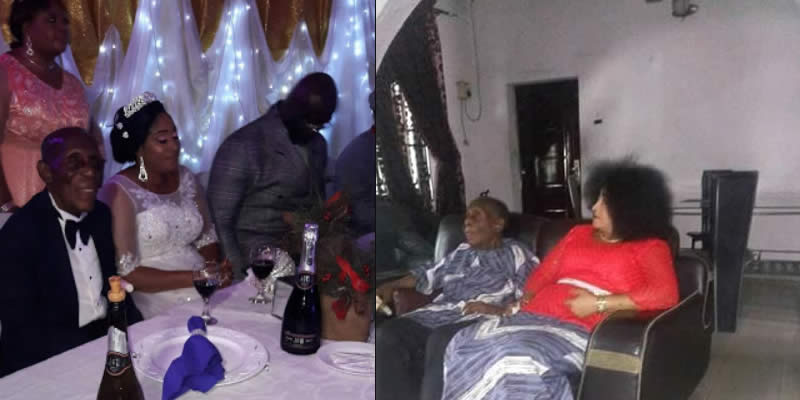 Senator Cyrus Nunyieh, who got married 11 months ago to a much younger bride, has died.

Pa Nunieh died barely one year after his society marriage to a young lady.

The prominent lawyer was a senator of the second republic and was also the first and oldest lawyer of Ogoni extraction.

Months ago, he made news headline after he took another wife, years after the death of his wife. He married a forty-something-year-old lady named Rosemary Ijeoma in Port-Harcourt, Rivers state in October 2017. Cyrus Nunieh, said he decided to marry another wife because he was alone and needed a companion after his wife’s death in 1991.

Sadly, he died less than a year after the union.

His death was announced this morning by the Ogoni Youth Federation.

The Ogoni Youth Federation announced the demise of Nunieh, who they said was their patron on their Facebook page in a statement signed by its Publicity Secretary, Lene Kingsley Lekue.

The group expressed shock at the news of Nunieh’s demise, whom they claimed was a Second Republic senator and lawyer.

“The national executive council of Ogoni Youth federation received with rude shock the sad news of the demise of her Patron, Sen. Cyrus Nunieh, a senator of the second republic and renowned legal icon who has gone to be with his creator,” the organisation said.

“We express our sympathy to the bereaved family, Ogoni ethnic nationality and Rivers state . We pray that almighty God will grant the soul of the departed eternal repose and comfort those in pain,”it added

READ:Woman hacks husband to death then tries to bury him in their bedroom

Senator Nunieh got married to his younger wife, Rosemary Ijeoma, in October 2017. In an interview with newspaper, he said, “I cannot continue to stay alone. I love her and she loves me. We understand each other and she is also intelligent.”

READ:“I am a great cook, no woman can do shakara for me” – Ramsey Nouah reveals secrets of his 16 years marriage

“There is no limitation in age. Some may say you are old; you may soon die. But some were dead even before they were born. Some were one year or two years old and they die. Death is not always dependent upon a man’s age,” he said.

How Odunlade Adekola’s P.A was murdered by Fulani herdsmen  – Survivor,…