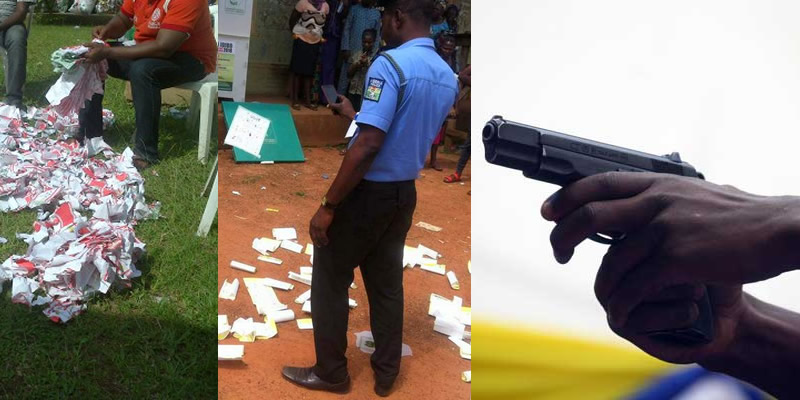 According to PUNCH, there are cases of shooting and ballot snatching in Ward 18, Units 7, 8 and 9, Port Harcourt City, in the ongoing House of Assembly bye-election for the Port Harcourt Constituency 3 seat.

While the Peoples Democratic Party is accusing the All Progressives Congress of using the Special Anti-Robbery Squad to unleash terror and create fear in the minds of voters, the APC insisted that the PDP engaged militants to disrupt the exercise.

The bye-election became necessary when the former occupier of the seat, Victor Ihunwo, left to contest the local government election before the seat was declared vacant.

Suspected hoodlums on Saturday mobbed a correspondent of the News Agency of Nigeria, covering the bye-election in Port Harcourt, Rivers State.

Chief correspondent John Amieyeofori recounted that thugs descended on him at an INEC registration centre in Port Harcourt city, hitting him and taking his money and other valuables.

Rivers, the oil capital of Nigeria is one of the nation’s political hotspots where political positions are determined by fisticuffs and guns.

Amieyeofori said, “When the thugs approached me, one of them grabbed my shirt and started hitting me.

“The thug then tore my shirt into shreds and dispossessed me of some money and other valuables I had on me.

“As if that was not enough, the thug attempted to use his dagger on me but miraculously missed on several attempts.

“I have never witnessed such vicious and unprovoked attack in my many years of monitoring elections.”

Amieyeofori, who said that he did not sustain any life-threatening injury, wondered why anyone would want to harm a journalist performing his duty.

But the visibly traumatised reporter is currently receiving treatment at a hospital in Port Harcourt.

INEC is conducting a bye-election to fill a house of assembly seat vacated by Mr Victor Ihunwo, who became a Local Government Council Chairman.

Nigeria is set to undertake another general election in 2019.