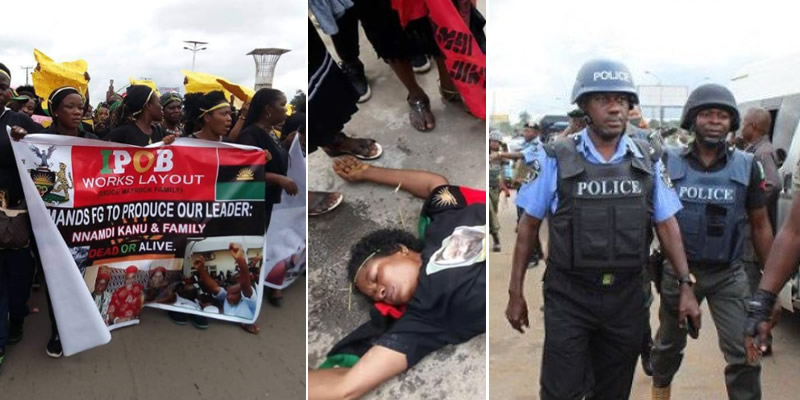 The IPOB women while protesting for the whereabout of their leader, Nnamdi Kanu, equally also demanded a referendum for an Independent state of Biafra by the Federal Government.

The woman adorned in black attire with Biafra insignia such as flags and caps sang pro Biafra songs. They accused the Federal Government of “deliberately marginalising Biafran people”.

The protesters caused major gridlock in the state capital.

Marching through Okigwe-Bank and Warehouse roads, the women accused the Federal Government of knowing the whereabouts of the IPOB leader.

They displayed placards with various inscriptions such as, “No referendum, no elections;” “We want to go. Pharaoh let Biafra children go;” “Tell us where Nnamdi Kalu is whether dead or alive;” “Nigeria will have no peace until Biafra is allowed to go.”

Trouble started at the Government House roundabout, Owerri, when policemen on sighting the demonstrators fired teargas canisters at them. The women defied the police action and continued with their march.

At Warehouse Junction, policemen in operational vehicles intercepted the women, fired another round of teargas canisters and arrested many of them.

While some of them fled to safety and started jeering at the policemen, the cops took the arrested protesters  to the state command headquarters.

An elderly woman, Mrs. Jane Obi, who was part of the protest, told our correspondent that policemen were bullying them for conducting themselves ‘‘in an orderly manner.’’

The woman, who spoke in Igbo, said  not even police “brutality” would deter them from demanding a Biafra referendum and the whereabouts of Kalu.

In a telephone conversation with our correspondent, the state commissioner of police, Dasuki Galadanchi, confirmed the arrest of the women during the demonstration.

The CP said the protesters were arrested for unlawful assembly and disrupting the public peace, adding that they would be charged to court.