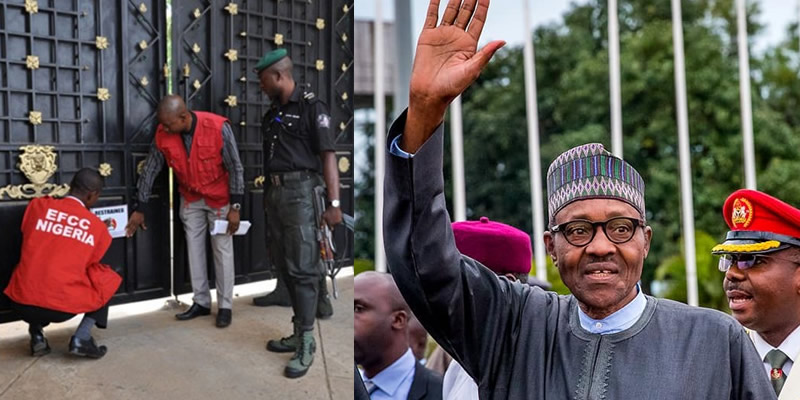 President Muhammadu Buhari returned to Abuja last night at the expiration of his vacation in London with a vow to jail more of the thieves that brought economic problems to the country.

The President‘s plane touched down at the Presidential wing of the Nnamdi Azikiwe International Airport, Abuja at about 6.35p.m and he alighted from the plane some five minutes later.

President Muhammadu Buhari on Saturday promised that his administration would jail more looters who caused the nation’s economic woes.

Buhari made the promise in an interview he granted shortly after he returned to the country from London.

When asked what Nigerians should expect from him on resumption, the President said, “Most Nigerians are expecting that we are going to jail more of the thieves that brought economic problem to the country. I think that is being expected of me and I will do it.”

On the defection of the Senate Minority Leader, Mr. Godswill Akpabio from the Peoples Democratic Party to the All Progressives Congress, the president said it is one of the beauties of democracy as it affords individuals the choice of identifying with political party they are interested in.

He, however, advised politicians to provide the necessary dividends of democracy to the people and sensitise their constituents to get the permanent voters card to enable them freely vote for candidates of their choice.

He was received at the airport by Governor Yahaya Bello of Kogi State, Service Chiefs, FCT Minister Mohammed Bello, and Chief of Staff of the President, Abba Kyari among others.

President Muhammadu Buhari on Saturday sent a letter to the Senate and the House of Representatives, informing the federal lawmakers that he has resumed his duties as President upon the completion of his 10-working-day leave.

The Senior Special Assistant to the President on Media and Publicity, Garba Shehu, disclosed this in a statement made available to journalists.

Buhari wrote the letter titled “Resumption of Office” shortly after he returned to Nigeria from London, the United Kingdom where he remained throughout the vacation period.

The President’s letter to the National Assembly read, “In compliance with Section 145 of the 1999 Constitution (as amended), I write to intimate the Senate (House of Representatives) that I have resumed my functions as the President of the Federal Republic of Nigeria with effect from today, Saturday 18th August, 2018,after my vacation.