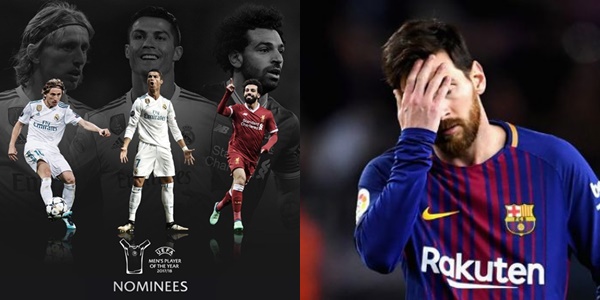 Messi misses out as Ronaldo, Modric and Salah make final three-man list for the 2017/18 UEFA Men’s Player of the Year award

After an incredible debut season at Liverpool, Africa’s best player, Mohamed Salah has been shortlisted in the final three-man list for the 2017/18 UEFA Men’s Player of the Year award.

How were the #UEFAawards nominees shortlisted?
Who were the rest of the top ten?

? UEFA Men's Player of the Year: the lowdown ?

Salah, who was named PFA Player of the Year after his successful debut campaign in the Premier League, scored 44 goals for Liverpool last season, while Ronaldo scored 27 La Liga goals to add to his 15 in the Champions League.

The Portugal forward is the current holder of the award having won it three times in the past four seasons.