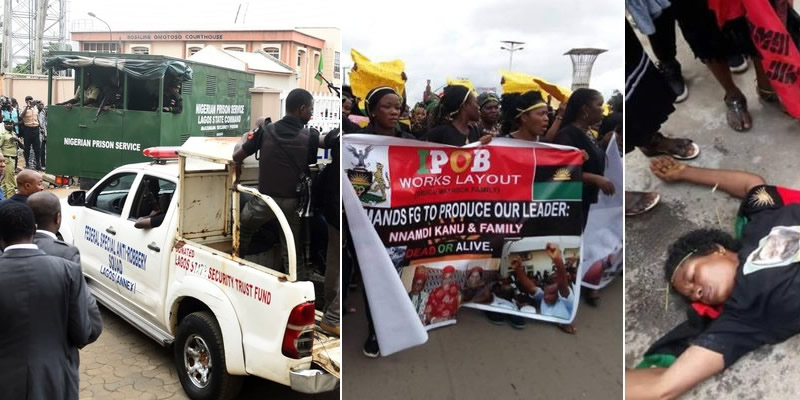 One hundred and twelve women suspected to be members of the proscribed Independent People of Biafra were on Monday remanded in the prison custody by a magistrate’s court presided over by S.K. Durumba in Owerri, the Imo State capital.

Two of the women, including a pregnant one, slumped and were rushed to an undisclosed hospital before the commencement of the court sitting.

The women, who were arraigned on eight counts, were arrested in Owerri by the operatives of the Imo State police command on Friday for demanding to know the whereabouts of the missing IPOB leader, Nnamdi Kalu, and asking the Federal Government to conduct a referendum for an independent state of Biafra.

At the commencement of the court sitting, the police prosecutor, Thaddeus Okey, told the magistrate that he was withdrawing two out of the 10 counts.

The two counts that the police prosecutor withdrew bothered on allegation that the women belonged to a terrorist organisation.

Some of the charges read, “That on August 17, 2018, within the Owerri magisterial district, with intent to carry out some common purpose, assembled in such a manner as to cause persons in the neighbourhood to fear on reasonable grounds that the persons so assembled will tumultuously disturb the peace and thereby committed an offence punishable under Section 70 of the Criminal Code.

“That you conspired with others now at large to commit misdemeanour: to wit conduct likely to cause a breach of peace and thereby committed an offence punishable under Section 517 of the Criminal Code.

“That you and others now at large did in a public place, conduct yourselves in a manner likely to cause a breach of the peace by unlawfully obstructing the flow of traffic and other business and thereby committed an offence punishable under section 249 (d) of the Criminal Code Act.

“That you did, assemble yourselves together and publicly exhibited banners, emblems, flags or symbols of Indigenous people of Biafra and thereby committed an offence punishable under section 88(b) of the Criminal Code.

“That you conspired with others now at large to commit felony to wit treasonable felony and thereby committed an offence punishable under section 516 of the Criminal Code.”

The women, who pleaded not guilty to the charges, were represented by no fewer than 10  lawyers.

The magistrate, who refused to grant bail to the accused, adjourned until September 3 for legal advice by the attorney general of the state, stating that her court had no jurisdiction to entertain the matter.

But there was a drama while the women were waiting for the court to commence sitting, as a pregnant woman and another middle-aged woman among the accused people collapsed.

They were immediately rushed to an unnamed hospital for revival.

The development caused the police prosecutor to remove the names of the women from the charge sheet and informed the court that they would be arraigned when they regain consciousness.