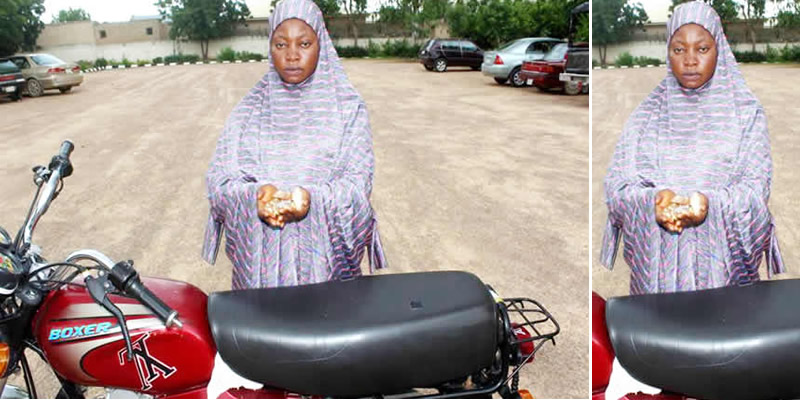 An 18-year-old lady identified as Zinatu Abubakar, has been arrested by the police in Katsina for allegedly drugging a man in an attempt to steal his motorcycle.

Zinatu Abubakar tricked the Okadaman into chewing a chocolate bar, which made the victim become unconscious. The police said the suspect, who resides at Hayin Danmani Quarters, Kaduna state, was a member of a syndicate that specialised in trickery.

The Katsina State Police Command spokesman, SP Gambo Isah, told journalists in Katsina on Thursday that Zinatu was arrested on Wednesday and was undergoing interrogation.

He said, “On August 29, at about 10:00hrs, based on a tip-off, the command succeeded in arresting a female member of a notorious syndicate of motorcycle thieves that specialised in deceiving unsuspecting motorcycle riders by offering them poisoned chocolates.

According to Isah, Zinatu offered a chocolate bar to the motorcyclist, who on taking it fell off the motorcycle and became unconscious.

“With the good efforts of nearby Good Samaritans who witnessed the incident, the said suspect, Zinatu Abubakar, was arrested while her cohorts, one Abubakar and Chairman took to their heels and escaped.

READ: Homosexual jumps into man’s house, attempted to rape him in Bauchi

“The suspect confessed to have used the same modus operandi in Kaduna and Kano and robbed innocent cyclists of their motorcycles. Effort is in top gear to arrest other members of the syndicate,” the police spokesman said.