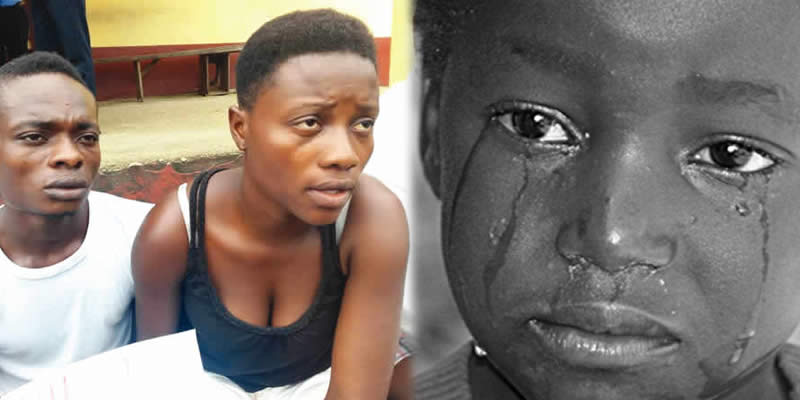 A 27-year-old man, Mr Daniel Bassey, and his wife, Magdalene, have been arrested for trafficking their two-year-old son for N180,000 to an agent in Port Harcourt, Rivers State.

Parading the couple and 78 other suspects involved in various crimes at the headquarters of the Cross River State, Police Command in Calabar, the Commissioner of Police, Mr Hafiz Inuwa, said the duo were arrested on July 23, 2018 in Calabar after a report by the mother of the child.

Inuwa said the mother of the boy reported to the Efut divisional headquarters that her husband took their only son, Moses Bassey, to an unknown person in Port Harcourt through one woman simply known as Mummy and collected some money.

He said, “On July 23, 2018, one Mrs Magdalene Bassey, reported at Efut Divisional Headquarters in Calabar that her husband, Mr Daniel Bassey, took their first son to an unknown person in Port Harcourt through one woman called Mummy.

“The police immediately swung into action and arrested the suspect. During interrogation, the suspect revealed that his wife was a party to the transaction. They are now in police custody to help the police to unravel the cause of this inhuman action and face possible prosecution.”

He said efforts were on by the police to ensure that the baby was recovered.

During an interview with Southern City News on Tuesday, Daniel Bassey, confessed to the crime, adding that he gave out the child as collateral for N180,000 loan to help him pay his house rent .

“I did it based on the debt of N21,000 I collected from a friend to pay my house rent. There is no work in this rainy season and I am jobless. A guy from my area informed me that he knows a woman who lends money to people.

“That my friend told me that I can give out the child as collateral to get the money without necessarily selling him. The woman gave me N180,000 immediately after she received the child.

“After that, my mother in-law came and asked me of the child and I lied to her that I took the baby to my brother for holiday,” he said.

His wife, Magdalene, who hails from Bakassi Local Government Area of Cross River State, admitted that she consented to the act.

She said she agreed to it so that they could solve their financial problems.

He assured that the command would continue to work in collaboration with other security agencies and residents in the state with a view to safeguard lives and property in the state.