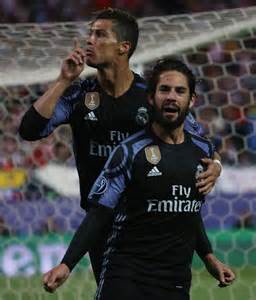 Isco claims Real Madrid do not miss Cristiano Ronaldo yet

We’re playing very well now; players who didn’t score as many goals last year are now filling their boots. We don’t miss him at the moment. I wish him all the best at Juve

Real Madrid star Isco has claimed that the club is not missing Cristiano Ronaldo just yet following his move to Juventus.

The Spaniard has been part of a Real Madrid side who are adapting to life without their former talisman.

Los Blancos may have lost 4-2 to rivals Atletico Madrid in the UEFA Super Cup final but have won all three La Liga games since.

Two of those have also seen Real Madrid score four goals as the team looks to share the burden of Ronaldo’s lost quality.

We don’t miss him at the moment’

While many expected Madrid to miss Ronaldo, Isco has claimed that they are not missing him just yet.

“Cris is an extraordinary player,” he explained to the press, as quoted by FourFourTwo.

“We’re playing very well now; players who didn’t score as many goals last year are now filling their boots. We don’t miss him at the moment. I wish him all the best at Juve.”

The future of the Spanish national team

Isco was also speaking about his new boss on the international stage.

Former Barcelona boss Luis Enrique has taken over and Isco is ‘enthusiastic’ over his management.

“We knew him already. He has a lot of character. He’s won many things,” he continued.

“In the end, the philosophy and the idea are the same. He changes a few things, he has his way of seeing football, but it’s similar.

“We have had a few training sessions with him, we have to adapt but we’re very happy. We’re very enthusiastic at this stage.

“Every game requires a way to play. If you play against 11 behind the ball, there isn’t much more you can try. We haven’t won with long balls. We have to improve, but we have to continue from this point.”

“Leave God out of feminism” – Tboss sternly warns all feminists

I didn’t rape Mayorga, we agreed to have sex – Ronaldo insists