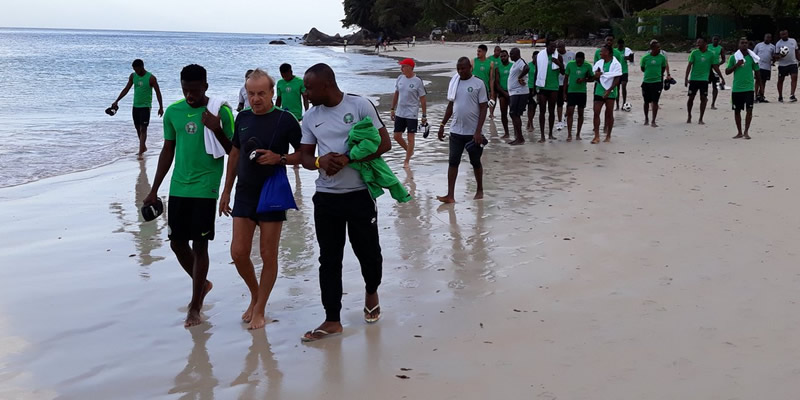 The Super Eagles picked up their first points in the qualifying campaign for the 2019 African Cup of Nations after defeating Seychelles 3 – 0 at the Stade Linite on Saturday.

Goals from Ahmed Musa, Chidozie Awaziem and Odion Ighalo saw the Super Eagles pick their first win of the qualifiers, with debutant Samuel Kalu causing havoc to the Pirates defence.

Musa and Awaziem handed the visitors a two-goal advantage in the first-half and Ighalo added the third from the spot after one of Kalu’s numerous teasing runs was halted in the box.

1. Rohr’s men not very impressive: The Eagles got the job done quite alright. But over 90 minutes, you get a feeling that they should have absolutely crushed their hosts. When the passes were not delayed, they went astray and the play was sloppy at times. Let’s hope it is the pitch.

2. Victor Moses will not be missed: Nigerian fans on social media, could not stop purring over Simon Kalu. The winger was easily the best player in the green and white and tormented the Seychelles defence over and again. He was replaced by Henry Onyekuru, who showed encouraging glimpses in the few minutes he was on the pitch. With Victor Moses hanging up his boots, Rohr would be glad to have both of them in his squad.

3. Seychelles, whipping boys: From the day the draws were made, you already knew that the Seychellois would be the team everyone would get points from. The Pirates shipped in five goals in their first game against Libya and could have easily conceded the same number against Nigeria. Nothing to be ashamed of, as most of their players have day jobs and football for them is part time.