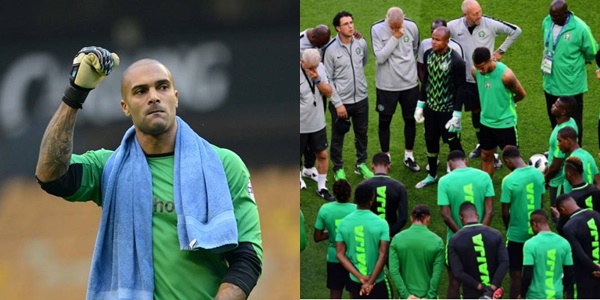 Super Eagles players have begun to pay their tributes to goalkeeper Carl Ikeme after he announced his retirement from international football.

The 31-year-old announced his retirement on Friday, July 27 much to the surprise of football loving Nigerians.

Ikeme played a key role for the Super Eagles during the qualification stage of the 2018 FIFA World Cup as he was the first choice shot-stopper before he suffered acute-leukaemia which ruled him out of action.

In his message on Instagram, Ikeme thanked the management and staff of Wolverhampton Wanderers for their support.

His message read, “after advice from the doctors I have taken the decision to retire. It’s not a sad day for me but one to look back with fondness and joy for being able to live my dream.

“I just want to thank everyone at @wolves for there support over the years. We have rode the good and bad times together , an I’m great-full to of been apart of the clubs history. I’m looking forward to catching up with everyone again soon and being back around the club and city !! Thank You!!!.”

Upon posting the message several Super Eagles star have taken to social media to pay their tribute to the goalkeeper.

Some players posted on their social media handles while others paid their tributes by writing a message in the comment section of his post.

He said, “Carl, you have been a great brother and teammate. I want to wish you well in the next chapter of your life.

“You have been fighting your battle for a long time and you are in my prayers. May you be blessed with great new beginnings and good health #Soldier”

Leicester City forward Kelechi Iheanacho said, “Gods grace will always be with you Carl, you will be remembered.”

Chelsea defender Kenneth Omeruo wrote, “I would have love to play with you more my bro @carlikeme ..But am happy you will be with us in good health.. You are a legend bro.. and am sure Nigerians will miss seeing you in the national team.. Good luck my brother and like u said, it’s not a sad day.. ❤ where is the retirement party do .”

Ogenyi Onazi Super Eagles vice-captain wrote,“Thank God for your life and your health, this is most important bro ❤❤ @carlikeme.”

While Super Eagles midfielder John Ogu wrote, “Thank God for restoring back your health. And Good luck with your next chapter.”