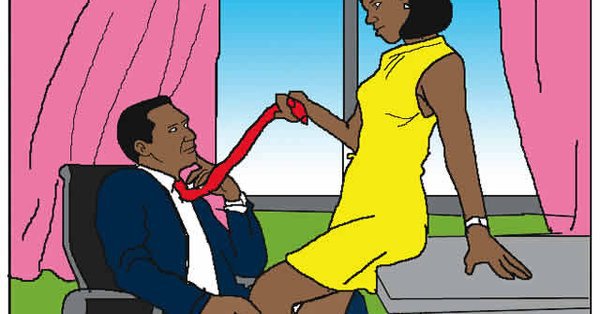 This is arguably the most important factor, as it even determines whether the lovebirds would still remain employed once a third party finds out.

The shame that confronted both of them as they were ushered out of the office premises that morning could make anyone in their shoes want to attempt the unthinkable – like entering the ground, if possible – at that moment. It all happened in the full glare of their colleagues.

The incident happened in East Anglia, United Kingdom, few months ago when two co-workers of Tesco Superstore were caught having a romp in the sack in the office after the close of work. In fact, it wasn’t the conventional way, the guy, 35-year-old Neville Fox, who was the Fresh Produce Manager, was performing oral sex on a younger colleague, who was 19.

They were recorded by a group of youngsters who saw them through the window from somewhere in the neighbourhood, and after the video went viral and the firm investigated it, they were both fired from their jobs. UK Sun reported that the lady cried as she was escorted off the premises, alongside a distraught Neville.

Frankly, it goes without saying and it’s entirely understandable that romance (not necessarily sexual) in the workplace is one thing that has been there for a long time and might not fade out completely. It is even more pronounced in offices where employees spend lengthy time at work, which makes it more probable for one or two of them to start having attraction for one another and from there take things beyond official.

On why people actually go into relationship in the workplace, a consultant psychologist, Prof. Oni Fagboungbe, said, “There is always a setting that brings people together and so, when two people meet consistently in a setting, maybe in the office, market or even in the airplane, and since stimulus and response influence people’s actions and behaviour, that is why people meet anywhere and they fall in love.”

While that of Neville and the 19-year-old lady led to sexual intimacy, some do not get to that level and it’s just a matter of enjoying each other’s company. Also, while some, including married persons, do it as a fling, some others initiate it with the intention of getting married to such persons. However, the latter is the focus of this piece. Thus, for people considering engaging a co-worker in a serious relationship, and not just based on shared feelings about something wrong at work, here are things to note before giving it a go.

This is arguably the most important factor, as it even determines whether the lovebirds would still remain employed once a third party finds out. While there is nothing wrong with falling in love with a (junior or senior) colleague at work, everything could be wrong with it if it’s against the policy of the company. This is because it could lead to the sacking of either or both of them if the company policy does not support it. Thus, before going into any relationship in the workplace, people are always advised to find out whether the company allows it or not. If it’s not allowed, such persons, provided they are both serious and confident it would lead to marriage, should have a tete-a-tete about it to determine who would go and who would stay. This is necessary before the company finds out and one or both are sacked. Notably, the decision is often but sometimes arguable that the person with the brighter prospect and higher pay should stay while the other should leave. Fagboungbe said such persons should weigh the cost benefit analysis and put other variables into consideration.

He added, “Offices have organisational policies and conditions of service, so, people should understand the condition of service of the organisation and that is why organisations should also do orientation for their workers. Romance is infectious, and if care is not taken, before you know it, you have carried it to an extreme level that is not tolerated by the office and someone could lose their job.”