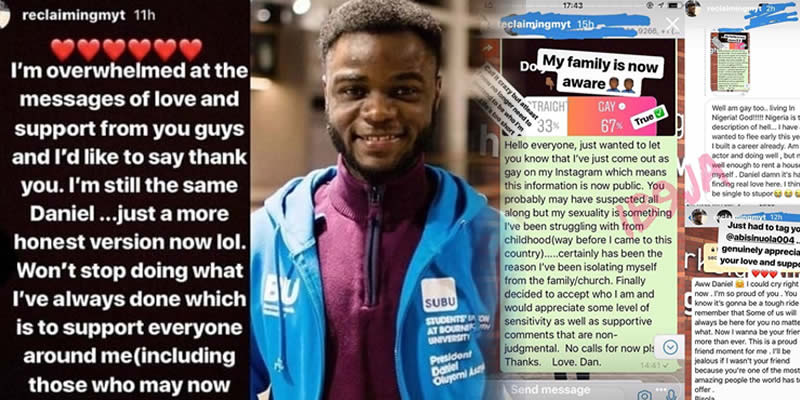 A Nigerian student identified as Daniel Yomi has gained support from friends to live a life he deems fit. Yomi emerged as the first black Student Union president at Bournemouth University, where he studies. In coming clean with his colleagues, he announced that he is gay and got the supports of other students

A Nigerian-born student identified as Daniel Yomi has gained massive support from his friends and school mates after coming out of the closet.

The young man shared a post revealing details about his sexuality which he claims to have suppressed for a long time. Daniel, who recently emerged as the first black Student Union president of Bournemouth University, UK, stated that coming out of the closet is needed for him to live a honest and truthful life.

The young man attracted the attention of many of his colleagues who encouraged him and showed their support for him. With pride, he shared some of the messages he received from his friends, where most of them promised to be with him as he finds his space in the world.

Dan who is from a Nigerian household also revealed that his family is aware of his status and while it might be difficult for him because of his background, he has chosen to be more honest with his peers.

READ: Bobrisky discloses his bae, says he’s a married man with a wife

“My husband is gay, his boyfriend lives in Lekki” – Woman cries…

Many of his colleagues sent him several messages approving the path he has now chosen to follow. Some have advised him not to ever visit Nigeria, given that the law is against those who practise such.

He shared this in a post on social media, where he stated that men often hurt women in their lives because their true soul mates are other men. You may also like to read; Diddy reportedly splits from Cassie, cling a 26-year-old model, Jocelyn Chew (photo)

EFCC gets Court order to keep Fayose, releases photos of his properties that risks forfeiture

Suspected Gay Handed Over To Police For Raping, Beating Boy In Delta (Video)