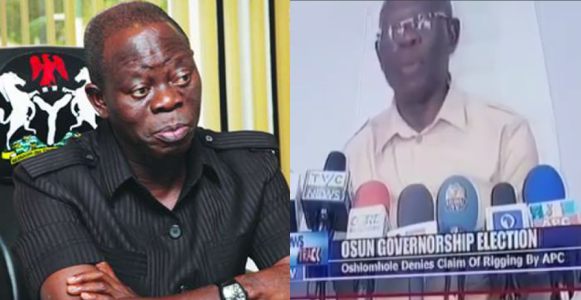 In a statement released online on Wednesday, Nigeria’s anti-graft agency, EFCC, reacted to the fraud allegations against the national chairman of the APC, Adams Oshiomhole.

The Economic and Financial Crimes Commission (EFCC) has reacted to a suit accusing the National Chairman of the All Progressives Congress, APC, Adams Oshiomhole of fraud.

An Edo State-based activist, Osadalor Ochie, had filed a suit before an Abuja Federal High Court challenging the failure of EFCC to file fraud charges Oshiomhole.

Ochie, in the suit prayed the court to compel the anti-graft agency to conduct investigation into allegations of fraud against Oshiomhole while he was governor of Edo State.

The suit also seeks the arrest and prosecution of the APC National Chairman.

In view of his prayer, the court had scheduled Tuesday for hearing, after processes were served on the two parties.

READ ALSO: NEMA: Drinking From The Chalice Of Corruption

However, counsels to Oshiomhole appeared in court but that of the anti-graft agency failed to show up.

Explaining why its representatives were not in court, EFCC said it did not appear in court because the plaintiff failed to serve it with the court processes.

A statement by EFCC spokesperson, Wilson Uwajaren on Wednesday reads: “Ahead of the November 19 date for the consideration of the preliminary objection by All Progressives Party National Chairman, Adams Oshiomhole, challenging the competence of the suit which seeks to compel the Economic and Financial Crimes Commission, EFCC, to arrest and commence criminal proceedings against him, the agency has blamed its absence at Tuesday October 23 hearing of the suit before Justice Anwuli Chikere of the Federal High Court Abuja on the failure of the plaintiff to serve the Commission with processes.

“This is contrary to the October 9 ruling of Justice Chikere, that the Commission be served.

“The Commission frowns at the attempt by counsel to the plaintiff, West Idahosa, to mislead the court with claims that the Commission had been served.

“Had the Commission been served, it would have been in court. Ours is an agency that holds the judiciary in high esteem and we will never disregard summons by courts of competent jurisdiction. The truth is that the Commission did not receive any summons.”