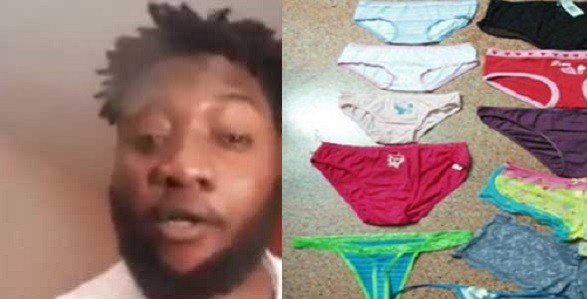 Man Advises Ladies, ‘Be Careful, Boys Are Selling Panties For N200k To N300K

In a video he shared online, the man explained that he decided to expose the booming pant business because of the woman in his life (his mother) as he revealed that boys are using the stolen panties for “underground purpose” in order to get quick wealth.

He also revealed that boys are now selling pants for N200,000 and the ones that have thick stains in the middle such as blood goes as high as N350,000.

He advised ladies not to spread their panties outside carelessly and to take a few when visiting their boyfriends/lovers because it’s risky and dangerous if one is secretly taken for the evil purpose.

He also said that why some guys have refused to disclose this to women is because some of the ladies like forming and always bring themselves high not knowing that their destinies are being used.

He claimed that this is one of the reasons why some ladies don’t marry on time and even become childless among other misfortunes that will befall them if their panties are used for the ritual purpose.

The young man said he has a soft spot in his heart for women and God won’t forgive him if he doesn’t expose this.