The lady whose sex tape with Apostle Chris Omatsola leaked has finally spoken up and she revealed some shocking details.

According to the lady in the sex video identified as Princess Tamaratokoni Okpewho, Apostle Chris Omatsola, a senior pastor of Zionwealth Of Life Assembly in Lekki, Lagos, was the one who released the video himself to get back at her for ending things between them. It was not a laptop repairer that released the video as reported when the video went viral weeks back.

Princess Tamaratokoni said her ex-fiance Apostle Omatsola was physically and emotionally abusive and was also manipulative. She shared photos of the injury he inflicted on her and said that contrary to his claims, the sex tape wasn’t recorded long ago when the pastor “was still in the world”, but was recorded this year when they were in a relationship. 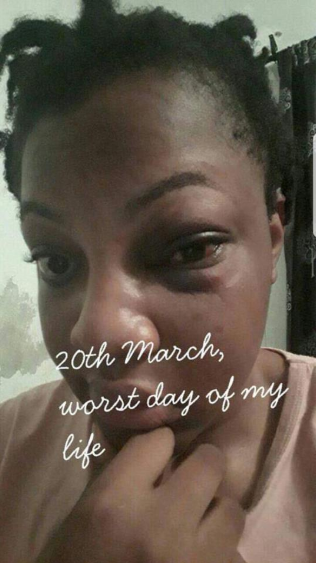 Apostle Omatsola also addressed the leaked tape in a video that can be seen below.

I met Apostle Chris Kevwe Omatsola, an author, the founder and presiding pastor of Zionwealth of Life Assembly (Zola) in Lekki, Lagos and we started dating in February 2018. It quickly escalated to become a sexual relationship and when we had sex the first time, he told me he was human to have such feelings inspite of the fact that he was a pastor and because he was madly in love with me, we should make it right by getting married. I was in love and was ready to do anything for him. We continued our romance and one of the things we did together was recording videos and taking pictures of our intimacy.

I informed my mum about a guy coming for my hand in marriage and she said was going to pray about it. Everything was rosy until he became violent and constantly beat me up till I bled (I have pictures of my bruises). He came begging after each episode and I forgave him because I thought I was in love. The vicious cycle continued (He would beat me, come back pleading, and I would accept him back).

Fast forward to late July, there was no response from my mum about bringing him to her as my intended spouse. I was also beginning to develop cold feet about the relationship as the violence increased. He was very temperamental and we had series of altercations which eventually degenerated to more beatings. In August, I called off the relationship and I was surprised he accepted it in good faith initially given his penchant for violence. We agreed to remain friends, but he just wouldn’t let go…crying, begging and prostrating on many occasions.

READ: I did not date my wife – Comedian Akpororo

Sometime in August, he asked that we meet up to talk on platonic grounds. After sometime during the meeting, he got really hostile with me upon realizing that I had moved on and wasn’t interested in making out with him. He also refused to drop me off at home. He beat me up, seized my phone, forced me to unlock it and retrieved a lot of contacts from it just to track who I was seeing. That was the final straw for me so I never saw him again till September when he showed up at my place, crying and begging. I refused to fall for his tricks this time and there was no further communication from both sides till sometime early October when he apologized yet again for all what he did.

On the 13th of October, he contacted me with an anonymous number via WhatsApp with pictures, videos and threat messages saying if I didn’t come back to him he was going to release everything. I profusely pleaded with him and also called everyone I knew to help beg him. A family friend called him and he promised he wasn’t going to release them, that he was just angry with me, he was trying to get my attention and hopefully win me back. I was calm after hearing this about 12noon that day.

Shockingly, at about 7pm that same day, I started getting calls from all my contacts about my nudes (pictures and videos) circulating all over the internet. A strange number also sent them to me via WhatsApp….my friends, my family and everyone on my contact list (recall he forcefully got the contacts from me in August). He even sent them to the same family friend who had earlier called to plead with him!

He was arrested the next day and didn’t deny posting the pictures and videos (there is a recording to this effect). According to him, he activated WhatsApp on someone’s number (a former girlfriend of his) and used the number to send the pictures and videos to my contacts and his church WhatsApp group. This went viral in a matter of minutes. Before he was arrested, a distraught me contacted him to ask why he eventually released them after he had promised not to. He said that now that my pictures and videos were out there, no man would want to look my way again, that it was best we got married and informed the world that we are a couple and its our business.

After the arrest, in the presence of his Dad, he yet again confessed to releasing the pictures and videos himself and admitted he was wrong. He apologized to myself, my family, his family and the general public. This was recorded 19th October 2018 and I am in possession of this video. He even accepted to pay for damages. We accepted his apology and thought we had laid this to rest.

We woke up Sunday morning (28th October 2018) only to discover that he had released yet another video, recanted his previous apology and claimed that the recording of the nudes and pictures happened when he was an unbeliever in the world. He even shed crocodile tears during the recording to make him appear like he was the victim. Chris and I started dating in February 2018 and the recording of nudes was done during the relationship (Feb 2018 – Aug 2018). There are currently posts from his church blog on the internet dated as far back as December 16th 2014 (http://zolanigeria.blogspot.com/) which is proof that the church had been in existence for some time. So how could we have recorded the videos when he was in the world, when we only met and started dating February this year and he had been a pastor long before we met? When exactly was he in the world???

I was wrong to have been involved in premarital sex with a pastor. I was wrong to have allowed him persuade me to record our intimate moments. I was wrong to have continued dating a violent man. I have been having sleepless nights thinking about the consequences of all I did and wondering how to get past this, how to move on. My family and friends see me differently. A lot of people look at me and whisper when they see me pass. I have been fielding questions from my colleagues. I hope that this will pass soon.

Apostle Chris Kevwe Omatsola is an unremorseful vengeful liar and a psychopath who will not stop until he destroys me and I have no clue what he wants from me. My only offence is that I refused to continue to be abused physically, verbally and emotionally and called off our violent relationship. I moved houses when he started stalking me and he still managed to locate my new place. I have waived anonymity and come out to refute all his lies. I fear for my life and that of my family and friends who are supporting me. I feel helpless and vulnerable and I don’t know what his next move will be.

See the screenshots below; 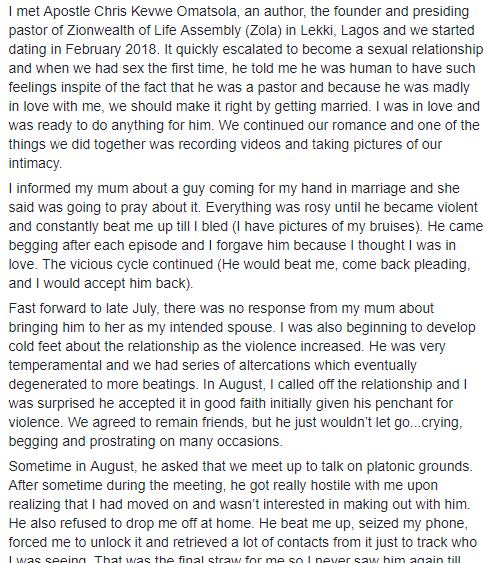 READ: These are signs that you may be dating the wrong person 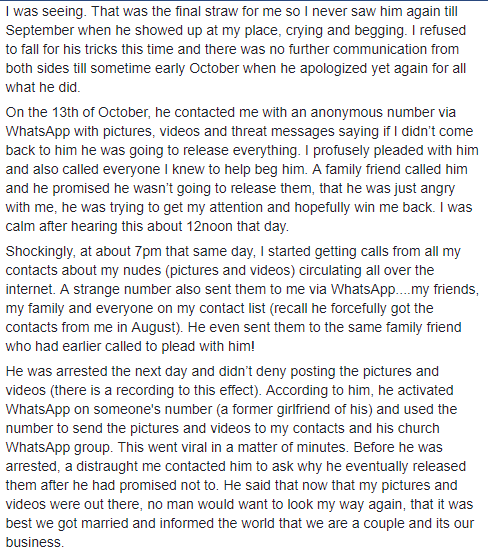 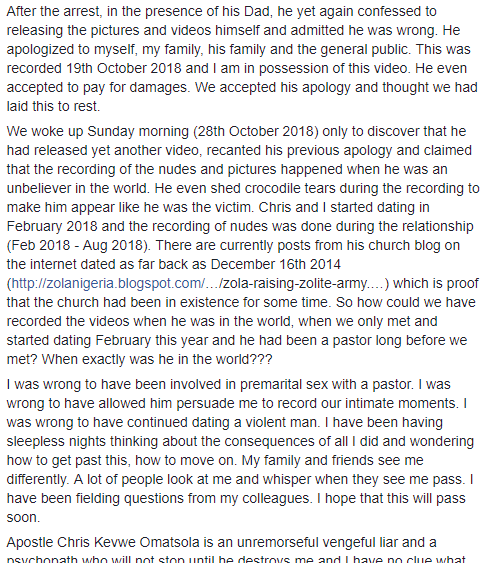 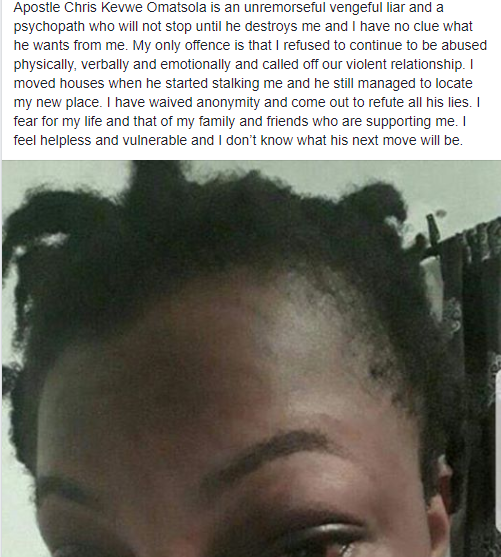 READ: Ifu Ennada reveals she lost 2 friends after leaving BBNaija due to her fame

Watch Omatsola’s reaction to the sex tape in the videos below.

You may also like to read; Rotimi Amaechi narrowly escapes another dangerous situation