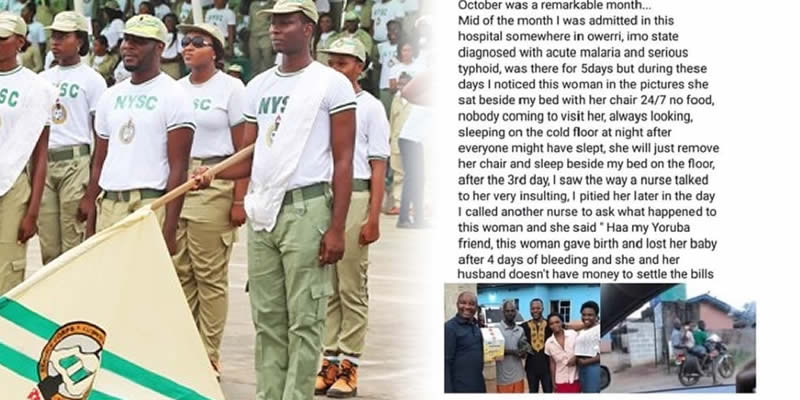 A youth corp member has taken to social media to recount how she and a few other corp members helped a woman who was detained by a hospital due to her inability to pay her bills.

Despite the harsh economy leading people to be more stringent with their spending and ability to help others in need, there are still a few kindhearted people who continue to prove that there are angels on earth.

A Nigerian lady identified as Funmilola Adeniyi who is currently serving, has left many people in awe and given a few people, food for thought after she helped in footing the bills of a helpless lady detained by a hospital due to her inability to pay the hospital bills after a miscarriage.

According to Adeniyi who was also admitted at the hospital, after she got to learn about the poor woman’s situation, she sort the help of other corp members and they successfully raised the same amount for the lady and her husband.

This is coming a few weeks after a corp member serving in Ogoja, Cross River, helped take a mentally challenged family of 5 off the streets. Identified as Progress Oberiko, she was later awarded by the NYSC for her contribution towards helping the family. You may also like; Man lands in hospital after sleeping with a ‘Muscular Lady’ from a blind date