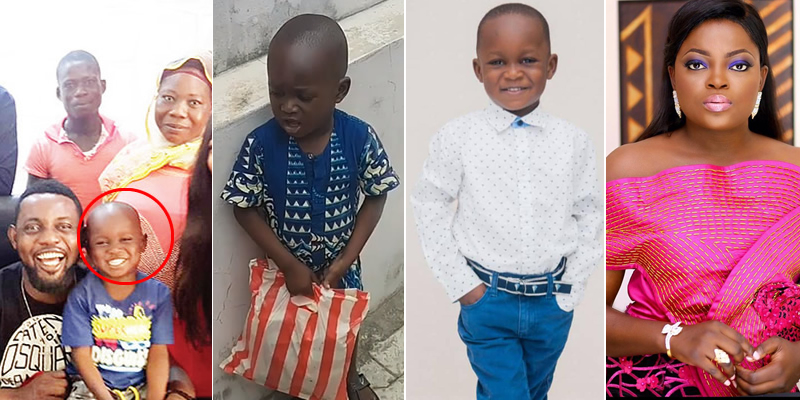 Few months ago, Taju a cute 5-year old boy went viral and became an instant social media sensation at the moment a video of him trying to speak English hit the INTERNET, he was unable to speak English because he hasn’t been to school before.

Celebrities started searching for him to send him to school, the likes of, AY Makun, Don Jazzy, Falz, Adeniyi Johnson, Mo Abudu, Funmi Awelewa, Alibaba and others.

Actress, Funke Akindele has given an update on the boy’s life and also shared a new photo to show his progress. The boy, who could barely communicate in English at the time, now looks so posh in the new photo.

It was also revealed that his name has been changed from Taju to Opeyemi.

A couple of months ago the video of TAJU a little boy from Ibadan, Oyo state went viral on instagram courtesy @aycomedian I reached out and told him that I would like to meet TAJU. @funmiawelewa brought him to me and I fell in love with his intelligence and vibrance. I thought about how TAJU would have better care alongside a secure future and the best thing to do was hand him over to his state government, so I reached out to Her excellency Mrs Florence Ajimobi the First Lady of Oyo state and founder , Access Basic Care Medical Foundation @accessbasiccare through my darling @abi_kd

I’m delighted to let you all know that this little boy is doing well under this foundation @accessbasiccare and I present to you the new Taju now called OPEYEMI. Thank you ma. May God bless you more @florenceajimobi
Thank you @funmiawelewa for reaching out to the boy firsthand. @aycomedian n for taking interest in him, starting up a fundraiser and putting in effort to make his life better God bless you.
PS: In whatever way you can touch a life, please do and do it selflessly. You never can tell whose light you can help shine.