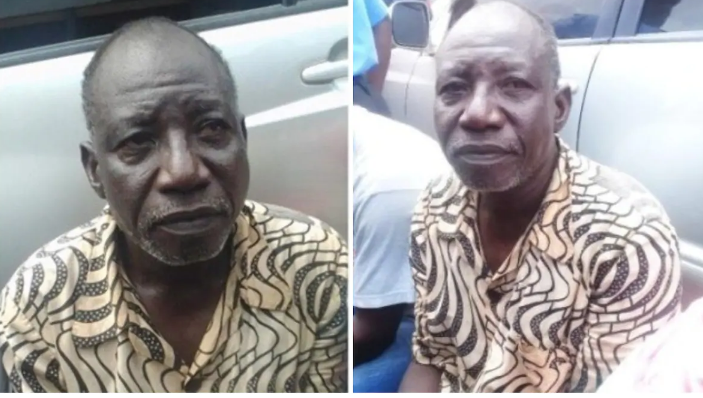 By Aanu Damilare On Nov 7, 2018
Share FacebookTwitterWhatsAppReddItPinterestEmailLinkedin
The suspect, Lukman Haruna, was reportedly arrested on November 2 based on information received from a neighbour.
It was gathered that the complainant, one Mrs. Abali, reported the case to the police after she discovered stains of blood around the girl’s private part.

Lagos State Commissioner of Police, Imohimi Edgal, who paraded the suspect before journalists on Monday, said the case is being investigated at the Gender Unit of the command.
Edgal said during preliminary interrogation, the victim told the police that the suspect had been fingering her private for quite some time.
READ ALSO: Jos Prisoners To Sit For NECO Exams
He said the victim was taken to a hospital where medical examination carried out revealed that the victim had been abused severally in the past.
“The victim identified the suspect as the one responsible for her predicament,” Edgal said.
The police boss added that as soon as investigation is concluded by the Gender Unit of the command, the suspect would be charged to court.
READ ALSO:
Similar Topics
Lukman Haruna
Share FacebookTwitterWhatsAppReddItPinterestEmailLinkedin
FOLLOW US ONLINE
FOR FASTER UPDATES
Follow @withinnigeria
FOR Trending Videos, Comedy, Viral Photos, Click to join Our INSTAGRAM: @withinnigeria
MOST READ TODAY
Top posts viewed today