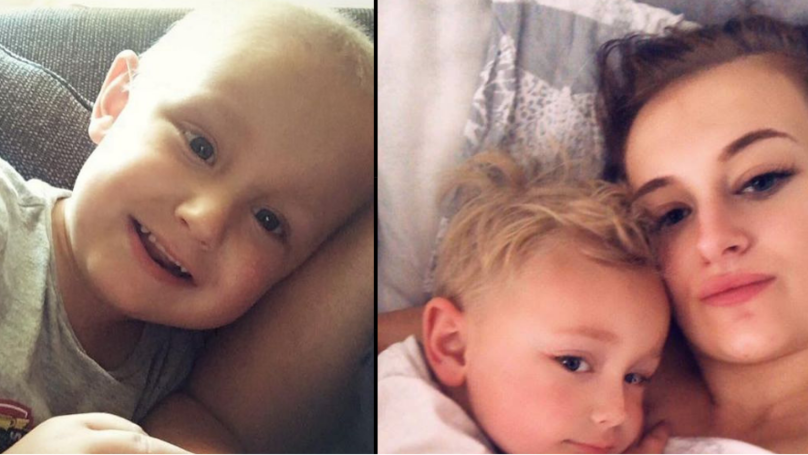 The heartbreaking story has emerged of a five-year-old boy who apologised to his mum on his death bed before he died, following his two-year battle with cancer.

Charlie Proctor was given just days to live by doctors last month after being diagnosed with a rare form of childhood liver cancer in 2016. His parents Amber Schofield, 24, and Ben Proctor tried desperately to raise enough money to get him an organ transplant in the US but they got only less than the needed amount.

Charlie, who was suffering from hepatoblastoma, died in his mother’s arms on Saturday evening, after he told her: “Mummy I’m sorry for this.”

Ms Schofield of Accrington in Lancashire, posted a picture of her little boy with angel wings to share news of his tragic death.

Last night at 23:14 my best friend, my world, Charlie, took his final breath.

He fell asleep peacefully cuddled in my arms with daddy’s arms wrapped around us. Our hearts are aching. The world has lost an incredible little boy.

Charlie, you gave me chance to be a mum.

You showed me what love really means Charlie. Now it’s time to fly, I am so, so proud of you.

You fought this so hard. My baby, I’m hurting so much. I will forever miss you baby bum. Sweet dreams my baby.

Charlie suffered from Hepatoblastoma, a rare liver tumour which can spread to other parts of the body. His parents began a fundraising campaign which even caught the attention of US popstar Pink, who shared the family’s crowdfunding page with her 5.1million followers.

But the family were unable to raise the over £1million needed for the trip to Cincinnati, Ohio, USA for a life-saving transplant.

Ms Schofield slammed “cruel” NHS bosses who she said allowed “rich families” to benefit over poor ones after Charlie was denied a liver transplant on the NHS.  The Proctor family claimed medics told them a liver transplant “would not be worth it”, given the advanced stage of Charlie’s condition.

After his cancer spread from his liver to his lungs, Charlie started to look more and more frail in photos posted by his mother, which were often taken in hospital where he underwent gruelling treatment.

Ms Schofield spoke of her devastation that his little sister Jessica would not grow up with her big brother and that she would not be able to see him grow up.

Posting on the Charlie’s Chapter page over the weekend, she said.

This will be the last photo I post of Charlie.

As the days go by he deteriorates more and more. He no longer looks like Charlie.

He’s so thin, I can see and feel every bone in his tiny body, his sunken face, his rolling eyes.

Where has my chunky baby gone. Chunky from birth! He weighed 9’11lb!

He’s was the cuddliest baby ever! He’s our chunk. I want everyone to remember Charlie for who he is.

I want them to remember how he looked, how cheeky he was, how hilarious, how grumpy he was because right now Charlie isn’t any of those.

‘I don’t know what to do anymore’ are his main words.

Today, he’s been very agitated, wanting to lay down, sit up, lay in bed, then on the beanbag, then on the sofa, then back upstairs and so on… charlie, at one point, turned to me and said in the most quiet, panting voice, ‘Mummy, I’m so sorry for this’ he was sorry because he wanted to move again and he felt he had to apologise for that?

So now I know he also feels like he’s some what ‘in the way’.

My heart broke! No child should feel the emotions Charlie is feeling. No Child! No parent should watch their child slowly go.

Having to watch them deteriorate in this way is the most painful thing anyone will ever feel.

If Charlie’s fate is to go, then I’d of rather the angels took him weeks ago before he suffered anymore