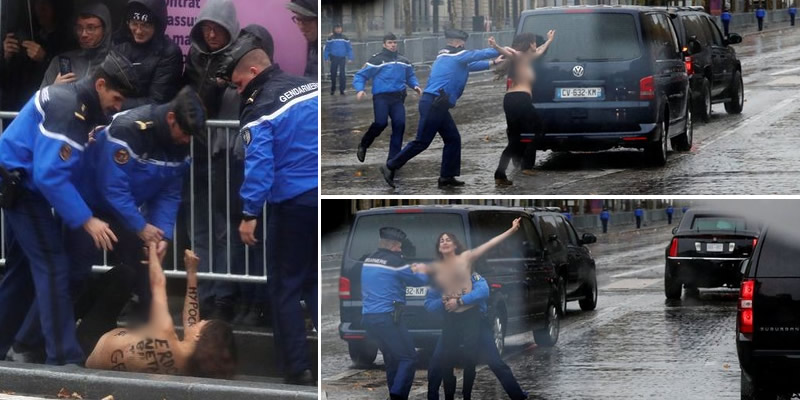 Police officers in Paris have detained a topless female protester who tried to jump into the motorcade of U.S. President Donald Trump as he made his way to the commemoration ceremony for Armistice Day in Paris, on Sunday, November 11.

US President Donald Trump was on the Champs-Elysees in Paris heading to a ceremony marking 100 years since the end of World War I.

One of the protesters, who had slogans including “fake peacemakers” and “hypocrisy parade” written on their chests, got within metres of the rear of the motorcade after jumping over a barricade.

She was grabbed by a police officer, while a second woman could be seen being hauled away by security services on the edge of the famous thoroughfare.

A third woman, who was positioned a little higher up the avenue, also managed to breach the security cordon and run towards Trump’s convoy with her arms raised.

She too was quickly overpowered by the police and all three were arrested.

The incident happened despite tight security, with some 10,000 security force members deployed around a city which has been hit by a series of jihadist attacks since 2015.

Interior Minister Christophe Castaner said Trump’s security had “in no way been threatened”.

Inna Shevchenko, one of the leaders of radical feminist group Femen, confirmed the group was behind the protest.

“FEMEN activists ‘welcomed’ the cortege of @realDonaldTrump twice on his way to Arc de Triumph,” she tweeted.

AFP photographer Ludovic Marin said one of the women had tried to sneak into the event before it started by posing as a photographer.

She was wearing a press badge in the name of a female photographer who was absent from the event, and was carrying a camera.

The woman was spotted during an ID check and removed by police officers, but photographers later recognised her as one of the three women arrested.

Femen, contacted by AFP after the protest, said it had no link with the woman despite Shevchenko saying the group was behind the protest.

Constance Lefevre, an activist who was among the crowd but did not participate in the demonstration, told AFP that Femen was protesting the presence in Paris of leaders “who are responsible for most of the world’s conflicts”.

Trump’s motorcade briefly paused due to the breach of security before continuing to the Arc de Triomphe where around 70 world leaders had gathered to mark the centenary of the Armistice.

Three Femen protesters had already demonstrated at the Arc De Triomphe on Saturday morning to denounce the presence of “war criminals” among the guests at the ceremony.

The three were also arrested.

Second coronavirus death reported in the US, health officials confirm

US Records First Death From Coronavirus