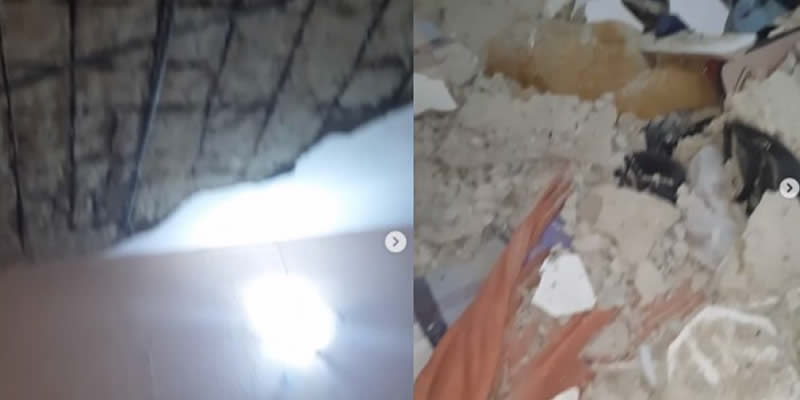 Lady cries out after roof crashes on sleeping neighbor in Lekki

A Nigerian lady has raised an alarm, after the roof crashed on her sleeping neighbor around 3am in Lekki area of Lagos State.

According to the Nigerian lady, how her sleeping neighbor survived the roof crash is still a miracle even though they’ve complained about the house shaking to the landlord, which she ignored.

At exactly 2:48am, I heard a big sound and I was scared. Only to discover that my neighbor’s apartment fell on her while she was sleeping. This happened in agungi,lekki. We have been complaining about the house shaking to the landlord but she has always ignored our complaint . How my neighbor survived this is only a miracle. Thank God no life was lost. Please repost until it gets to the proper authority. We don’t know what to do

Recall that few months ago, it was reported that two people were reportedly killed and one injured when a storey building in the Agege axis of Lagos collapsed partially.  Adesina Tiamiyu, general manager, Lagos State Emergency Management Agency (LASEMA),  who confirmed the incident, said other occupants of the building were immediately evacuated.

Tiamiyu said the agency got a distress call via the emergency toll-free number 10:48 am, concerning the building located at No 9 Abeje street, Markaz Agege.

“Unfortunately, two persons  (female adult Toyin Ogundimu 35yrs and a young girl Sherifat Olalere 11yrs) lost their lives to the incident and one male adult( Mustapher Salaudeen) was rescued and treated at the incident by the ambulance crew,” Tiamiyu said.

“The LASEMA Response Team, NPF,(Dopemu and Agege division) LASBCA, LNSC, TASKFORCE, LASG FIRE SERVICE(Agege division) and LASAMBUS were the responders at the scene.”

Maybe you will also like this; Lady calls out husband of sister who died with her unborn twin babies

Ik Osakioduwa Narrates Encounter With Police, Accuses Them Of Brutality