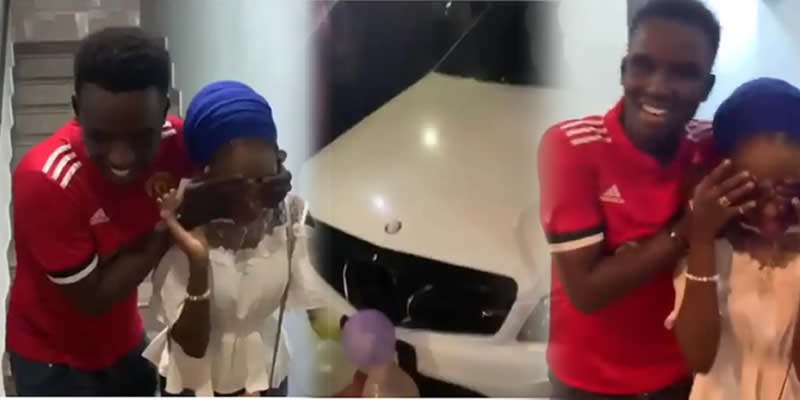 The internet has been thrown into a frenzy ever since video of a young 100-level-student gifting hid 16-year-old girlfriend with a brand new car and an iPhone XMax, surfaced online.

When Davido said, ‘love is sweet but when money enter, love is sweeter’, he sure knew a lot about what it meant considering he left many people in delightful shock after he got his boo a multi-million naira ‘assurance’ Porsche car as a birthday gift.

Well, Davido may have to scoot over because there’s a new young king redefining the term ‘assurance’! The young man believed to be in 100 level, recently left his 16-year-old SS3 girlfriend in awe after he got her a brand new Mercedez Benz, an iPhone XMax which costs N423k.

The young man identified as Zubair also got his clearly surprised boo an iWatch that costs a whooping N195k.

In the video which has been circulating the internet, the young girl identified as Nihat is seen filled with emotions and totally speechless as she is led by her boyfriend to her multi-million naira car.

The beautiful moment which took place in Abuja, was captured by their friends who were in awe as they cheered them on. The video has since gone viral on social media and this may be due to how expensive the gifts are, coming from such a young man to a much younger girl.

Well like they say, young love is indeed the sweetest! You may also like to see this; Meet Fatima Timbo, 21-year-old Instagram model living her best life despite dwarfism