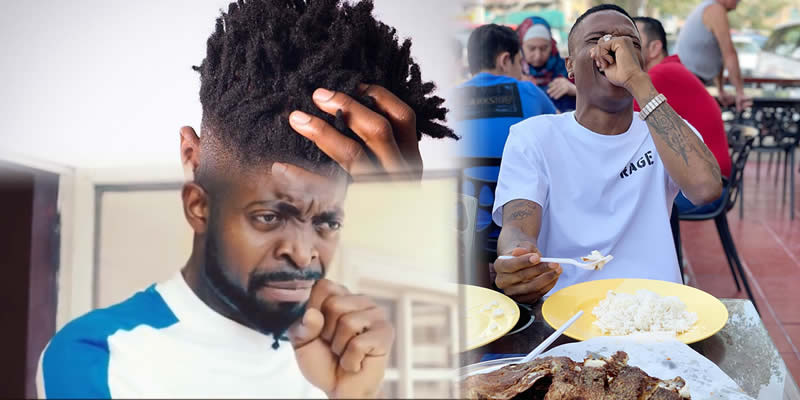 Basketmouth has accused popular singer, Wizkid of scamming Nigerians, and his reason is just as hilarious as you can imagine. So why did Basketmouth call Wizkid a scammer?

Well, It all started when Wizkid shared a photo of himself in company of friends, excitedly having a meal of what could be seen as white rice and a huge fish however, the stew was intentionally missing from the photo

The comedian then made a joke stating that the Video which got Nigerians reacting with the slang ‘STEW’ and ‘Everywhere Stew’ was a scam as Wizkid appeared not to be eating any despite stirring a controversy and causing the price of ingredients used in preparing stew to skyrocket in the market.

Wizkid fights dirty with Reekado Banks for releasing a song amidst…

So @wizkidayo with all the stew everywhere, you’re still eating white rice and fish? Continue deceiving us oh, after you don make tomatoes cost for market

So @wizkidayo with all the stew everywhere, you’re still eating white rice and fish? Continue deceiving us oh, after you don make tomatoes cost for market. Cc @ceezamilli @jayjamd1 @itzfemmybaby

You may also like to read; Nothing works without Holy Spirit – Tonto Dikeh preaches