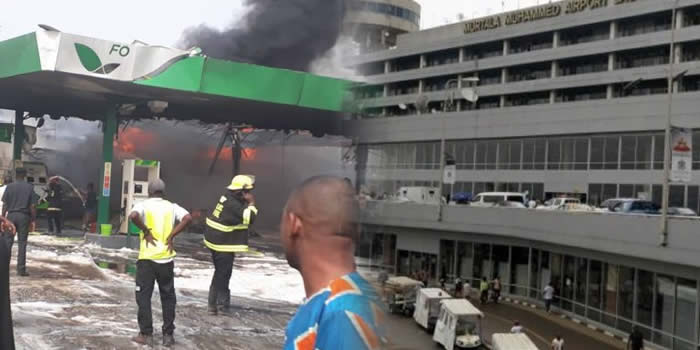 The fire incident at the Forte Oil filling station near the Lagos airport, is said to be caused by a tanker which exploded while discharging its content. The incident has also been worsened the traffic along the airport road inward the domestic wing.

Daily Trust reported that vehicular movement has been grounded totally at the airport road, as the fire is still burning because the tanker had 33,000 litres of fuel. Alhaji Yakubu Umar, an eyewitness who spoke to journalists, said that the iron barricade constructed by the state government on the Airport road from Ikeja under bridge should be removed to aid emergency evacuation in times of disaster.

While the fire has not been extinguished till now, sources disclosed that more trucks have been deployed by the state fire service and fire unit of the Federal Airports Authority of Nigeria FAAN.
READ: Greedy Tenants exhume landlord’s corpse, kidnap cripple son, attempts to sell house in Lagos

READ: Lady writes about lifeless body she found in Lagos

You may also like to read; Customs officers kill woman in Lagos

Soldiers and civilians involved in horrific accident in Umuahia (Photo)