There was pandemonium on Efon Alaye Close, Ojodu-Berger, Lagos, on Saturday, as a four-man robbery gang operated freely in the area and vandalised many vehicles.

A distress call to the 767 emergency line made by one of the residents during the attack around 3.30am did not yield positive results.

An official, who reportedly picked the call, was said to have assured the caller that a team of the Rapid Response Squad of the Lagos State Police Command would be deployed in the scene shortly.

Our correspondent gathered that a police patrol team from the Ojodu Police Station, a short distance away from the scene, later arrived at the area around 5.30am, one and a half hours after the bandits had left.

One of the victims, Olajoju Adekunle, who is a new tenant in the area and whose Toyota Highlander was vandalised, lamented his loss, noting that the incident happened on his first night in the apartment.

He explained that the gang scaled the fence to gain entry into the compound, where he parked his vehicle.

He said, “My permanent residence is in Mowe, on the Lagos-Ibadan Expressway, Ogun State. I work in Ikeja. I usually run into traffic while returning home in the evening, especially now that construction is ongoing at the expressway. On Thursday, I left the office around 4pm and got home at 9pm. I was so tired.

“I rented the apartment in Ojodu about a week ago so that I could pass the night there whenever there is traffic. I moved into the room on Friday evening. I parked my vehicle in the compound alongside three other neighbours’ cars.

“Around 3.30am, the theft alarm in my vehicle went off and I woke up. When I peeped through the window to see what was wrong, I saw some men on the premises.”

Adekunle stated that one of the robbers corked his gun and threatened to shoot whoever came out, while another moved around the compound, flashing a torch. 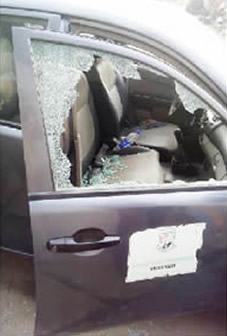 He told newsmen that two other members of the gang broke the window of his vehicle to gain entry and started removing some vital parts.

“One of them was shouting, ‘I need blood! Come out!’ They also opened the bonnet of my vehicle. I was shivering. It was a bad omen for such a thing to happen on my first day in a new apartment. Saturday was also my birthday.

READ: Court sentence man to death by hanging for killing stepmother who confessed to bewitching the family and refused to remove spell

“They flashed a torch into the other cars but they did not vandalise them. They left the compound at 4am. When I came out from my room, I saw that they had removed the brain box, headlamps, battery, musical set, the two side mirrors and some other parts. It was a great loss.”

A resident, who preferred to be identified simply as Tunde for security reasons, said he woke up to use the toilet when he got wind of the attack.

He said he managed to put a distress call to 767 and an official, who picked the call, promised that policemen would be deployed in the scene immediately.

Tunde said, “I noticed that it was a woman who picked the call. I gave her the address and she assured me that RRS men would soon be there. To my surprise, no policeman came. Those robbers left about 20 minutes after I made the call. If the policemen had come on time, the hoodlums would have been caught in the act.

“It was around 5am that I got a call from a policeman, who said he was from the Ojodu Police Station. He asked me if the robbers were still around. I was very angry. I insulted him and hung up on him. I still have the call logs on my phone.

“About 30 minutes after, four policemen came in a patrol van, blaring siren. They wanted to enter the premises, and I accused them of being irresponsible. Ojodu-Berger is less than five-minute drive to the close.”

Another resident, whose company’s vehicle, a pickup van, was vandalised, was lamenting when our correspondent visited the scene.

He said it was his first time of bringing the van home, adding that he wanted to use it to convey some goods early on Saturday.

“I parked the pickup by the roadside in front of my house. I wanted to go out in the morning when I saw its side window broken. They (hoodlums)  removed the brain box and the battery. I don’t know what to tell my boss now,” the man, who identified himself as Baba Dara, added.

A landlord, who did not want his name in print, said the incident made it the third time this year when robbers would vandalise vehicles in the area without any resistance.

He stated, “Security is very poor here. We are supposed to engage armed security guards to man the surroundings at night. But most of the landlords are nonchalant about the recurring attacks. There was a time the robbers raided about three streets and vandalised several vehicles.

“An SUV that was brought to a mechanic workshop for repair was among the affected vehicles. They removed the brain box, headlamps and the battery of the vehicle. The mechanic had to run around to raise money to replace the stolen parts.

“We are also faced with incidences of thieves tearing window nets and stealing valuables.”

Reacting to the incident, the Police Public Relations Officer in the state, CSP Chike Oti, said the Ojodu Police Station was informed that there was a distress call from  the area at 5.25am.

“Policemen mobilised to the scene immediately and got there at 5.30am. It was not a case of late response; it was a case of not getting information on time. The Lagos State Command is responsible and responsive. We don’t waste time in responding to distress calls,” Oti added.

You may like to read; Confusion as Lagos security guard electrocutes self

Davido reveals what he ’ll do for Wike, Rivers State