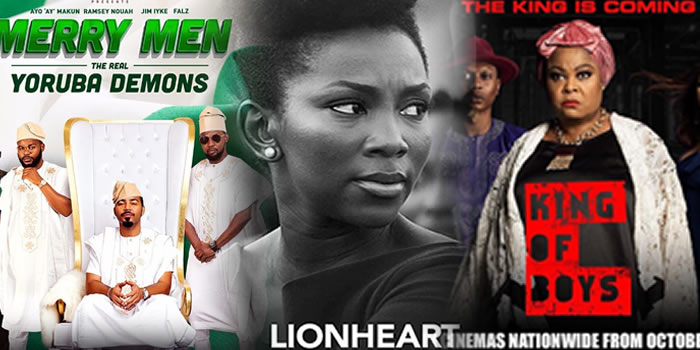 5 most talked about Nollywood movies of the year 2018

Is it just me or Nollywood made a lot of noise on social media this 2018? This year some Nollywood movies made their ways to the hearts of Nigerians in a different type of way than they normally do.

These movies made social media platforms especially Instagram buzz with lots of activities. Just to create awareness for movies, producers, directors and actors went above and beyond on social media with activities.

Hashtags were even created for these movies and trends began to spread among celebrities and fans who were interested in the movies.

King of Boys was centered around the story of Alhaja Eniola Salami who is a businesswoman and philanthropist with a not so clean past. The businesswoman’s story began when she could not balance her underworld connections with her promising political career.

The premiere of this movie had so much buzz on Instagram and it had celebrities stepping out in their best gang star royalty outfit.

The premiere of this movie had so much buzz on Instagram and it had celebrities stepping out in their best gang star royalty outfit.

Merry Men: The Real Yoruba Demons centered around four eligible bachelors based in Abuja. These men had thriving businesses, palatial homes, fast cars and the most important of all the attention of women.

The movie looked into how Yoruba Demons are described as handsome men with money and good careers who are regarded as play boys.

READ: Photos from #AgbadaChallenge for premier of ‘Merry Men’

This movie’s premiere created the agbada challenge on social media to center around the fact that Yoruba Demons always rock their best agbada to parties. Celebrities both men and women showed up in their best agbada.

READ: Style rush as Nigerian celebrities step out in amazing pieces for an event in Lagos

Chief Daddy tells the story of a billionaire benefactor to a large extended family, including household staff and mistresses. The movie centered around how the family members hustled to share the billionaire’s riches after he died and the burial party.

READ: Banky W And Adesua Etomi Meet Again On Screen, Watch Out for “Up North”

Up North has not been released in the cinemas but this movie has gathered so much buzz on social media maybe because it stars Nigeria’s power couple, Banky W and Adesua Etomi.

The movie tells the story of a young rebellious heir whose NYSC year does not go quite as planned when he found love. It explores love, friendship and family politics. It premiered on Sunday, December 16.

Celebrities showed up in their best Northern attires for the premieres Grand Durban dress code.

Lionheart did not create as much buzz as the rest of the movies on the list, but it had an element that none had.

The movie which centered around, how a young lady who was overlooked by her father and family proved her worth in a male-dominated industry, became the first Neflix original African movie.

You may also like to read; 5 things to know about Nollywood actor Fred Ebere, ‘Mr Do Good’

5 Nigerian celebs you should look up to for groom inspiration

“I got N45k from my first show”, says Zlatan Ibile as he reveals his…