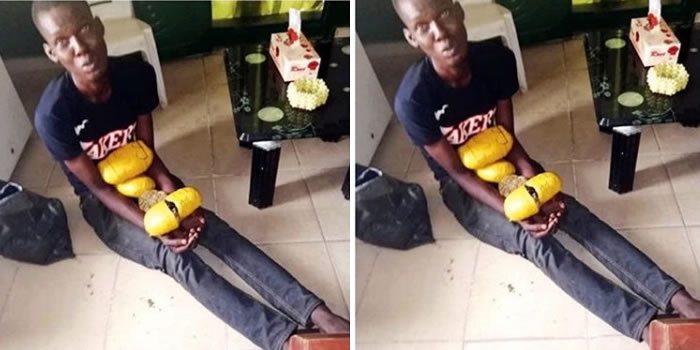 A three-man drug syndicate have been arrested by men of the Ikoyi Prison in Lagos for attempting to sell marijuana to inmates of the prison.

According to Punch, the suspects comprising of a 22-year-old man identified as Ikuomola Abolade;  Sodeeq Yunusa, who is an inmate standing trial for alleged robbery, and an unidentified person, who is presently at large, were apprehended while trying to smuggle the banned substance into the prison on Sunday December 30th 2018.

It was gathered that the suspects were arrested through a 10-year-old boy, who is part of the Intelligence and Monitoring Committee comprising selected officials of the prison, their wives, the drug unit and the police, which was set up to monitor the activities of intruders in the prison facility.

The 10-year-old boy saw the suspects throwing the banned substances into the prison premises and alerted his parents, but before his father could alert his colleagues, the suspects had boarded a tricycle. The officials gave them a hot chase and caught up with them at Obalende, but the unidentified persons escaped.

However, the CCTV installed in the prison caught the face of the inmate, Yunusa, picking up the banned substance.

Abolade, according to a source, is presently in the custody of the National Drug Law Enforcement Agency at the Murtala Muhammed International Airport, pending completion of the investigation.

The Lagos State Controller of Prisons, Tunde Ladipo, who confirmed the incident, said the prison authorities would ensure that the suspects did not escape justice so as to serve as a deterrent to others.

You may also like to read; Nigerian lady rides Uber without having cash, fights driver