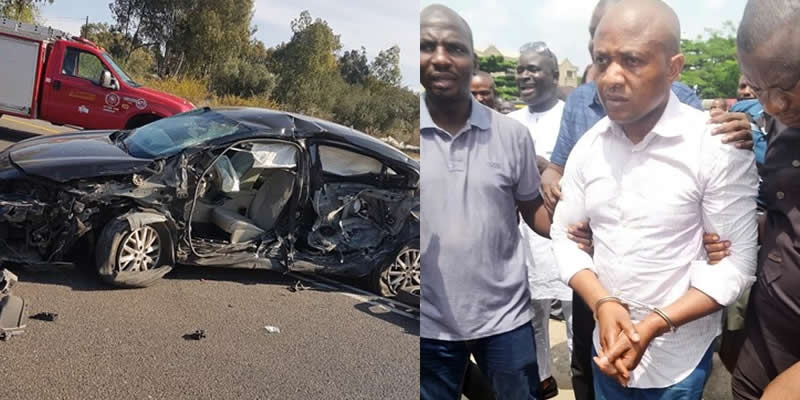 A prosecution witness, Inspector Idowu Haruna, scheduled to testify in the trial of a suspected billionaire kidnapper, Chukwudumeme Onwuamadike aka Evans, was yesterday reported to be involved in an accident.

State prosecuting counsel Adebayo Haroun, who disclosed this before Justice Oluwatoyin Taiwo of an Ikeja Special Offence Court, explained that the development was the reason the police officer was absent in court.

The development stalled proceedings in the charges preferred against Evans and three other members of his gang for allegedly shooting the Young Shall Grow Motors (YSG), Chairman, Chief Obianuju Vincent and killing of two of his escorts, before Justice Taiwo.

Although details of the accident were not stated, Haroun told the court that the witness sent an SMS informing him of his current predicament.

“My lord, our first prosecution witness is not present in court today. He is not in court because he had a slight accident.

“He sent me an SMS saying he was involved in an accident and therefore cannot make it for today’s proceedings. We craved the indulgence of the court to grant another date for trial.”

At the last proceeding, Inspector Haruna had told the court that Evans shot Chief Obianuju in his right arm while attempting to kidnap him. He said his driver, Peter Nweke and an escort, Chijoke Ngozi, were shot dead during a gun duel between the police escorts and the gang.

Three of the kidnappers were also shot dead by Inspector Solomon Igwe, while the rest fled.

In a related development, the defence team of the suspected kidnap kingpin, led by Olanrewaju Ajanaku, failed to serve copies of their final written address on the prosecution for the trial-within-trial on the admissibility of the alleged ‘confessional statement’ of Evans.

The development stalled proceedings in another charge against Evans and Victor Aduba, a dismissed officer of the Army, before same court.

Haroun had complained that a copy of the final written address by Mr. Emmanuel Ochai, counsel to Aduba, was also served on his team late yesterday.

He said that of Evans, the first defendant, had not been served on them.

Responding, Evans‘ counsel, Ajanaku, said his inability to file the documents was as a result of a ‘mix up.’

He assured the prosecution that the defence final written address would get to them between yesterday and today.

Evans and Aduba are facing a four-count charge of kidnapping and unlawful possession of firearms.

They were alleged to have kidnapped Mr. Sylvanus Ahamonu, holding him hostage for nine weeks and collecting $420,000 ransom from his family.

The defence had claimed in the on-going trial-within-trial that their alleged confessional statements were obtained by coercion by members of the Inspector-General of Police (IGP) Intelligence Response Team.