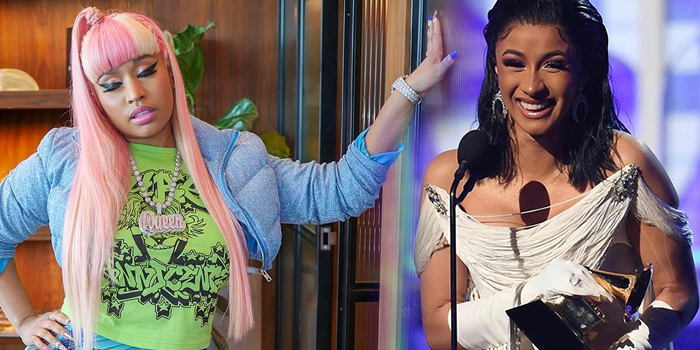 Nicki Minaj has revealed why she has never won a Grammy Award in her life despite years of being at the top of the rap game. She made this know after her rival Cardi B made history by becoming the first solo woman to win Best Rap Album at the 2019 Grammy Awards.

A fan, via a tweet, wondered if Nicki Minaj pissed someone off which might be the reason why she has never won a Grammy:

“Nicki Minaj has been at the top of her game for way too long to not have had a Grammy. I don’t know what white man from the boards she pissed off.”

Nicki Minaj then replied stating that the person she pissed off is the same man whom Ariana Grande called out for ruining her chances of performing at the just concluded event.

“I pissed off the same man Ariana just called out for lying. Grammy producer KEN. I was bullied into staying quiet for 7 years out of fear. But I’ll tell my fans the REAL on the next episode of #QueenRadio they deserve the truth.

Also, CONGRATS to everyone who won last night.”

“I can’t thank you guys enough for all the love & support you continue to show me. To everyone who said something sweet, thank you. Whether I read it or not, I felt it. From the bottom of my heart. I love you so much. So so so soooo much. Stay tuned.”