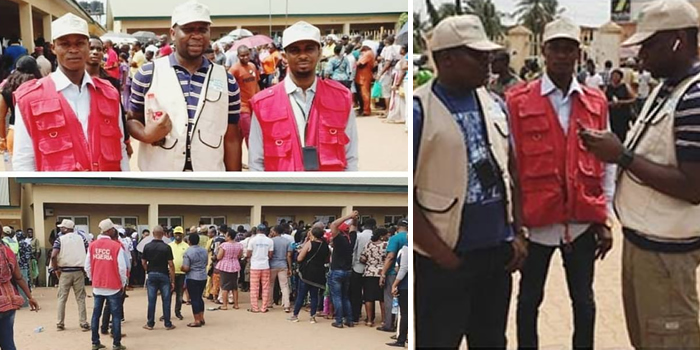 The Coalition of Civil Society Organizations on Human Rights and Conflict Resolution has spoken on the role of security agencies in the Saturday’s presidential and national assembly elections across the 36 states of the federation.

The human rights group specifically lauded the nation’s security agencies for being professional in discharge of their duties before, during and after the nationwide polls.

Maxwell Gowon, the Executive Director of the coalition on the security situation during the conduct of the polls commended the Nigerian Military for its efforts at ensuring peace, stability and security even though the forecast for security and life during the election had been grim.

While giving detailed accounts of what happened in some states during the polls, Gowon called on the security agencies to be at alert, considering that the prospect of violence in the aftermath of the announcement of results remains high.

The group also warned parties to caution their supporters against engaging in violence.

“The Coalition of Civil Society Organizations on Human Rights and Conflict Resolution deployed 4,000 observers for the Presidential and National Assembly (Senatorial/House of Representatives) Elections that held on Saturday February 23, 2019 across the country.
The coalition made the call to increase its focus on security situation, compliance with observance of human right and the general atmosphere of the elections.

“This decision was influenced by the fact that several other observer organizations were on ground to focus on issues like transparency, timeliness, openness and other fine points of the elections. The decision is consistent with the primary objectives and thematic focus of the Coalition of Civil Society Organizations on Human Rights and Conflict

“It is pertinent to point out at this stage that the observation by the coalition had incrementally being in place in the period preceding the elections, with the implication that some of the observations made on the Election Day were not done in isolation but in relation to ongoing incident tracking.

“The Coalition of Civil Society Organizations on Human Rights and Conflict Resolution observed, from the data collected by its observers, that there were incidences on the Election Day:

“In Abonnema, Akoku-Toru Local Government Area of Rivers state, gunmen suspected to be thugs hired by politicians attacked troops in duty leading to six of them being killed when the personnel of the Nigerian Army repelled the attack. A lieutenant of the Nigerian Army died in the encounter while two civilians died from gunshots of the assailants.
The Army arrested 15 persons acting as political thugs in Southern Ijaw Local Government Area of neighbouring Bayelsa state.

“In Delta state, the police confirmed two (2) persons dead in Sapele axis of the state.
Edo state recorded incidents of ballot box snatching but the Army stepped in to get the situation under control with perpetrators that were apprehended handed over to the police.

“In Cross River and Akwa-Ibom, the earlier warning issued by the Army with other security agencies was heeded as the situation was conducive.
Anambra state is one of the states where the Independent National Electoral Commission was compelled to reschedule elections owing to violence while Ebonyi state recorded violence that claimed three lives on the eve of the elections. Abia, Enugu and Imo states were largely peaceful.

“Lagos state is another state where some elections were rescheduled owing to violence. There were cases of ballot snatching and destruction of ballot at the point of counting in some instances. Overall, security agencies and the support of the Nigerian Army made it possible for the situation to remain under control without escalation.

“The pockets of violence in Ondo, Ekiti, Osun, Ogun and Oyo (one person was killed in Oyo state) states were easily managed. The presence of the military ensured that things did not overly get out of hand.

“In spite of the propagate threat to mar the elections, the explosions from Boko Haram/ISWAP in Borno state did not stop citizens from exercising their rights at the polls. The Nigerian Army successfully curtailed the ability of the terrorists to cause disruptions. Similar explosions in Yobe state did not prevent voting from taking place.
Gombe, Bauchi, Taraba and Adamawa recorded limited incidents that were not significant enough to affect the elections.

“In spite of the concerns previously held and incidents of pre-election violence recorded in Kano, the presence of the Nigerian Army ensured that voters were able to carry out their civic duties without fear. Kaduna, Katsina, Kebbi, Sokoto and Jigawa were largely free of major incidents to warrant concerns as the Nigerian Army’s presence in these places took away the incentive for violence while one (1) person was killed in Zamfara.
The Federal Capital Territory (Abuja) had the elections taking places peacefully while pockets of violence in Kogi state resulted in at least two deaths. Kwara, Plateau, Benue, Nasarawa and Niger states recorded lesser violence than earlier feared.

“The feedback that observers got from voters is that there are factors that mitigated the risk of violence thereby leading to fewer cases of violence, voter intimidation and ballot box snatching than anticipated. Among the factors identified are:
“Rivers state, Lagos state and other places were violence was intense happen to be home to the strong critics of the directive for the military to deal with ballot box snatchers. These are also the places where the highest number of persons attempted to delegitimize the directive to the Army.

“The recorded instances of violence, especially where they resulted in the loss of life, would have been prevented if people did not attempt to criminalize the assigned role of the Nigerian Army in their bid to score political points.

“The Coalition of Civil Society Organizations on Human Rights and Conflict Resolution has adopted interim positions pending the conclusion of state elections scheduled for March 9, 2019:

“The coalition commended the Nigerian Military for its efforts at ensuring peace, stability and security even though the forecast for security and life during the election had been grim. It is noteworthy that the military, notably the Nigerian Army, discharged this onerous responsibility with full recourse to the rules of engagement.

“The coalition condemns in the strongest terms the attack on troops on election duties. The act amounts to unnecessary provocation and aggravation that continues to make it necessary for the country to deploy troops for elections even though this is ordinarily a duty for the civil police.

“Urge all security to remain on high alert considering that the prospect of violence in the aftermath of the announcement of results remains high.”