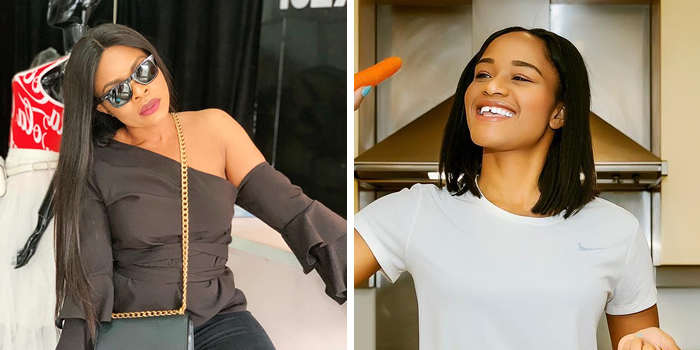 Nigerian fashion blogger Laura Ikeji has taken to social media to reveal that she is ready to reconcile with her sister-in-law, Amara Kanu. The fashion blogger is married to Ogbonna Kanu, the brother of retired Nigerian footballer, Nwankwo Kanu.

We had earlier reported that Laura, who is the younger sister of media mogul, Linda Ikeji, had revealed that she and her sister-in-law, Amara, are not friends and they do not talk with each other.

In a recent Instagram post, the young mother of one noted that she and Amara who is Nwankwo’s wife were once really close until the lady called out her husband on social media.

According to her, she is a person who believes in family bond and she would never ever want to come between siblings.

Ikeji noted that she hopes that she and Amara can meet up soon to talk and hug out their differences. She stated that she had made the comment that they were not friends because of what happened between her husband and Amara.

She further explained that she does not want to be known as the person who intentionally came between siblings because she would not want something similar to happen between herself and her siblings.

The fashion blogger expressed that she would be glad if people stop supporting one family over another, adding that she wants love to lead.

So this is my beautiful sister in-law, heard she’s great, heard because we have never met but heard she’s cool. Hopefully we’ll meet soon and talk x hug this whole thing out.

We were quite cordial until she called my husband out on Instagram n never apologized. Since then we never spoke or exchanged messages, hence the “We re not friends statement.

Listen guys I’m not someone to ever bring negative light to the family, I’m a strong defender of family, u see how I love my siblings that’s how I’ve been with all my in-laws. I don’t want to be known as someone who would intentionally bring division among siblings cos I won’t want that With my brother or sisters.

My husband n his brother re quite close n I don’t want that to change for any reason Whatsoever.

I won’t want that to happen to me and Peks. Besides my in-law is an amazing man.

Pls enough of the hate, enough of the name calling, enough of supporting one family or the other, let’s stop the team A or B. In the end we will all sit at a table and eat as one big happy Kanu family.

All I said were from an angry place and I’m never someone to be angry or let a troll get to me. I shouldn’t have.

So hey let’s be a lil kinder and let love lead.

Will make the first move and put a call through. And Amara pls call ur bro inlaw hun, it’s time for that talk.”