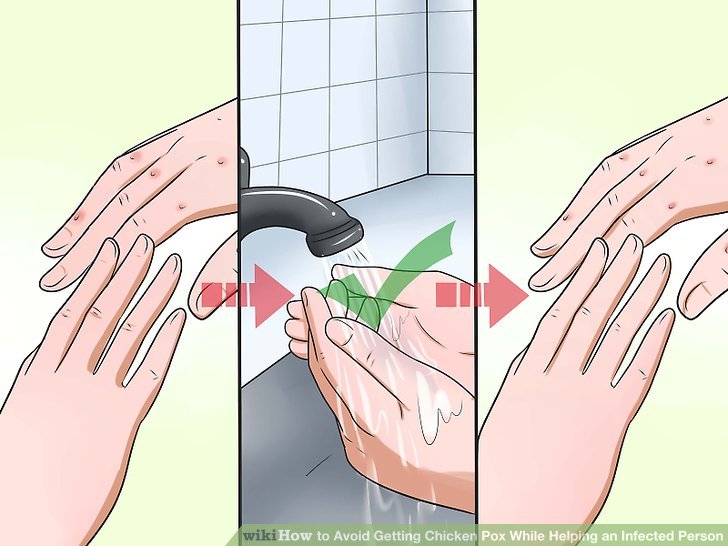 How to protect yourself from chicken pox

Chickenpox is highly contagious. If you are not vaccinated and have never had chickenpox, contact with someone who has it will almost always lead to infection. Early vaccination and being careful around those who have chickenpox are the most important precautions you can take.

Chickenpox is caused by the varicella-zoster virus, which is one of the herpes viruses. The German Standing Committee on Vaccination (STIKO) at the Robert Koch Institute recommends being vaccinated to lower your chances of infection. If you or someone in your family gets chickenpox there are several things you can do to avoid spreading it to others.

Most importantly, people who have chickenpox should avoid contact with anyone who hasn’t had it and with people who have a greater risk of developing more severe symptoms. This especially includes people with a weakened immune system, newborn babies, and non-vaccinated adults. The virus can harm unborn children during pregnancy, and can be life-threatening for newborns. Generally speaking, though, chickenpox rarely has any serious consequences in children who are otherwise healthy. But it can be unpleasant.

How long is chickenpox contagious and how does it spread?

Chickenpox is already contagious one or two days before the typical rash appears. People usually have a headache and aching muscles at that point. Chickenpox remains contagious until the last blisters have dried up and the scabs have all fallen off.

Chickenpox is spread by tiny droplets of saliva released into the air when someone who is contagious breathes, coughs, sneezes or speaks (this is sometimes called “droplet infection”). The viruses may also spread through direct contact or by touching objects or clothing.

One thing many people don’t know is that you can also get chickenpox from contact with people who have shingles. They may spread the varicella-zoster virus through direct contact, but not through droplets in the air. People who have had chickenpox can still get shingles years or even decades later.

Who is the chickenpox vaccination recommended for?

As of August 2004, the German Standing Committee on Vaccination (STIKO) at the Robert Koch Institute has recommended a chickenpox vaccination (varicella vaccination) for all children. STIKO’s recommendation is a first vaccination between the ages of 11 and 14 months and a second one between the ages of 15 and 23 months. Depending on the specific vaccine that is used, the two vaccinations should be given at least four to six weeks apart. The vaccine is injected. It can be given at the same time as a combination vaccine against measles, mumps and rubella (MMR vaccine). A combination vaccine against measles, mumps, rubella and varicella (MMRV vaccine) is also available.

Other groups of people are also advised to get vaccinated if they haven’t yet had chickenpox. These include teenagers, women hoping to get pregnant, and people who have certain other conditions, such as severe eczema. You can find more information about the varicella vaccination and STIKO’s recommendations on the Robert Koch Institute website.

A chickenpox vaccination may cause side effects similar to those of other vaccinations, such as redness around the injection site and mild fever, but these go away after a few days.

People who have been vaccinated can still get chickenpox. That is rare, though, and the course of the disease is usually milder then. The risk of complications is lower, too.

What if you’re not immune and come into contact with someone who has chickenpox?

If you have never had chickenpox and are not vaccinated, you can get vaccinated within five days of coming into contact with someone who is infected. Studies involving a total of 110 healthy children whose siblings had chickenpox showed that:

Chickenpox vaccinations should not be given during pregnancy. If a pregnant woman who has not been vaccinated and isn’t immune comes into contact with someone who has chickenpox, she should see a doctor quickly. Within four days of contact, special antibodies can be injected to fight the virus. This is called “passive immunization.” It can stop chickenpox from developing fully, or at least weaken the symptoms. Passive immunization is also an option for newborns if their mother develops chickenpox a few days before or after giving birth. It is done to try to protect the baby from more severe symptoms.

How can you avoid infection in everyday life?

If someone in your family has chickenpox, the following precautions may help lower the risk of infection: