My Nigerian boyfriend is a ‘Monster’ but I love him; Thai woman lament on domestic violence

Thai woman identified as Pattara Bumrungsak accused her Nigerian boyfriend, Williams Ransom Uzoma of domestic violence as she shares photos of her injuries

A Thai woman has accused her Nigerian boyfriend of domestic violence and shared a couple of videos showing the injuries allegedly inflicted on her by him.

Pattara Bumrungsak and Williams Ransom Uzoma live in Malaysia, which is where the alleged abuse took place. Pattara claims he beat her in public and it was her neighbours who intervened.

Sharing clips of her injury, she wrote:

He is good at talking and lying anything he say to cover up himself because it is what he’s always done in life! I will never make a report or put him in trouble with the police, but i only want an apology from him! I do love this man but after all this i better stop. And one thing I hate the most is why his brother supports and protects him after all of this! They blamed me for tarnishing the house name because I got beaten by his brother again! Like seriously!!!! if he cared about their safety, he wouldn’t beat me outside of the house like that. All of our neighbors saw what he did to me and are witnesses. Thank you for my neighbors that help me out last night. GOD BLESS YOU. 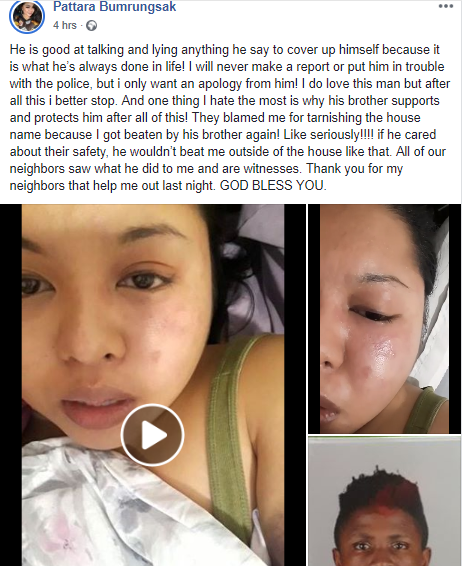