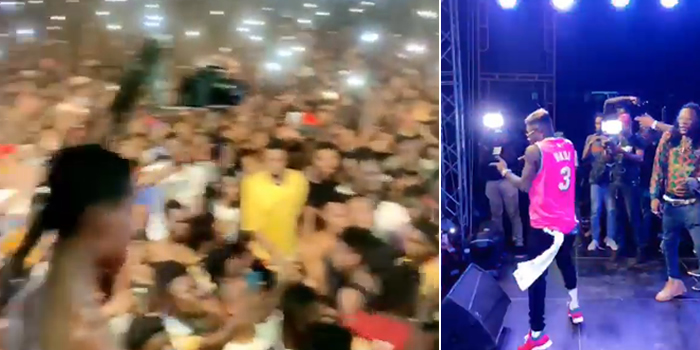 Controversial dancehall musician Shatta Wale has reportedly been made to walk off the stage at an event held at the University of Ghana, Legon.

This action was as a result of the students protesting against his performance on the stage.

Shatta Wale was the headline artiste for the 2019 Legon Hall Week Artiste night, but to the student, his performance on the night was not what they had bargained for.

He was said to be lip-syncing on stage when the students had expected him to perform live as agreed by both teams.

However, Shatta Wale failed to do so, making the students so angry because they felt he did not respect them enough to honour his part of the agreement.

The angry students were said to have had some quarrels with his bodyguards, while others put off the light causing Shatta Wale to walk off the stage and bringing the show to a sudden end.

I am worth over $10 million – Shatta Wale

By walking off the stage, Shatta Wale did the wisest thing because it was possible that he could have been harmed by the aggrieved students who had already managed to plunge the whole venue into darkness.

Meanwhile, Shatta Wale has been in the news recently for breaking up with his girlfriend and babymama in less than three months after proposing to her on stage.

He took to his Snapchat page to post series of messages directed at the mother of his child as he revealed that they are no longer together.

Shatta expressed his undying love for Michy especially because of their child, Majesty. He also explained that he has taken the challenge to be alone and still chase his music dreams.